Spain Park girls surge past Indians to a Sweet 16 bid 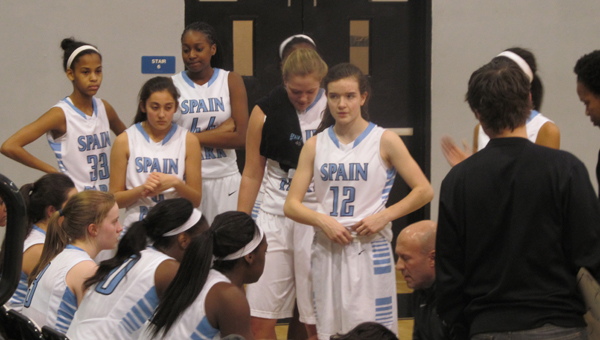 By JORDON SEMIEN/For the Reporter

HOOVER —The state sub-regional matchup between the Jaguars of Spain Park and the Wetumpka Indians got off to a fast pace of run matched by run, until the Jags found their rhythm in the third for a 60-46 win.

The Indians came out the gate with the full intent of playing run and gun ball as they looked to force turnovers and initiate their fast break offense. It paid off as they ran out to an early 9-2 lead at Spain Park’s first timeout at 4:28 in the first. Wetumpka’s Adrianna Armstrong led the charge with five of the team’s nine points, finishing with 18 points, five rebounds and two steals before fouling out in the fourth quarter.

Spain Park head coach Mike Chase calmed his team down and established their game plan. The timeout paid off as the Jags came back to close out the opening period with a 9-2 run of their own to tie the game at 11.

Spain Park’s rally was led by Victoria Baldwin and Keyasha Gordon as they worked their way into the paint. The quarter ended with the Jags leading 26-23 as Wetumpka racked up six team fouls in the first half.

Baldwin netted 20 points to lead all scorers along with her three rebounds, while Gordon brought in 8 points and a game high 10 rebounds. Amanda Gaston added 12 points and three boards of her own, as Jemaiya Lee helped play clean up in the third and fourth periods with nine points and seven boards.

The Indians kept it close throughout the fourth, but the Lady Jags crashed the boards for a combined 39 rebounds, winning 60-46.

After the game, Chase stated that he was proud of his team digging out of an early hole for the win. “I thought after that first couple minutes, we settled down a little bit, didn’t have as many of those turnover that led to easy points,” he said. “We were able to chip away and get back into it and then build a lead.”

With the win, the Jags punched their ticket to the regional semifinals on the campus of Alabama State University on Feb 19.

FROM STAFF REPORTS The University of Montevallo men’s and women’s basketball doubleheader against Young Harris College has been rescheduled for Sunday,... read more