What’s it always gonna be? An AV! 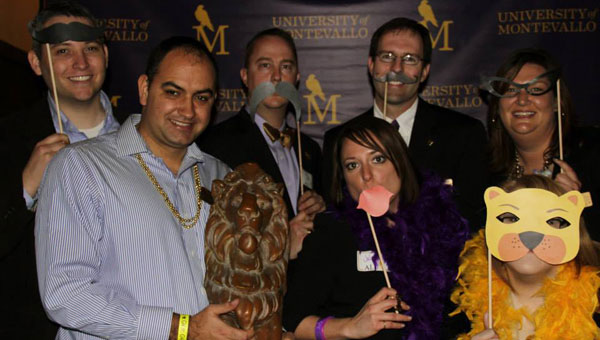 The executive officers of the Univeristy of Montevallo Junior Board of Directors have fun in the photo booth at the Young Alumni Mixer. From left, Rick Casey, Jason Booi, Jeff Purvis, Julie Harbin, Patrick McDonald, Tiffany Bunt and Lindsey Sherrill. (contributed)

The University of Montevallo has the oldest homecoming tradition in America.

The community of Calera is fortunate to have this tradition, known as College Night, right in their own backyard. Since 1919, the entire UM campus divides into Purple or Gold sides, and there are events and intramurals, pitting the sides against each other.

Homecoming culminates with College Night performances: musical shows written and produced by students from the ground up. The battle cry for both sides is “What’s it Gonna Be?” and the answer is either PV (Purple Victory) or GV (Gold Victory).

Calera businessman Jeffrey Purvis knows about this tradition all too well. Purvis, performance management analyst at A.C. Legg, is a 2002 graduate of the University of Montevallo, and is still very active at his alma mater today.

He is currently serving as the president-elect of the UM Junior Board of Directors. He has been serving on this board since 2006.

“Homecoming at Montevallo is easily the busiest weekend of the year for me,” Purvis said. “This year, I attended a dinner honoring the Most Distinguished Alumni, the Junior Board meeting, several club and department reunions, the Purple & Gold basketball game, an auction from the art department, the Young Alumni College Night Mixer, and of course, the shows!”

Purvis explains that homecoming takes on a slightly different meaning once you become an alumnus. “My favorite part of homecoming is seeing all of my friends from college. I see more at homecoming than at any other time of the year.”

“Alumni who come to Montevallo for homecoming recognize that no matter the outcome of the ‘friendly’ competition between the Purples and the Golds, that alumni always win because they are back home amongst friends. The rivalry is much less intense as an alumnus.”

He goes on to laugh about a new saying on campus that was coined by the alums. “Alumni Victory was a term born several years ago as a joke that has become its own thing,” he said. “The battle cry for alumni has become ‘What’s it always going to be?’ The reply is AV!”