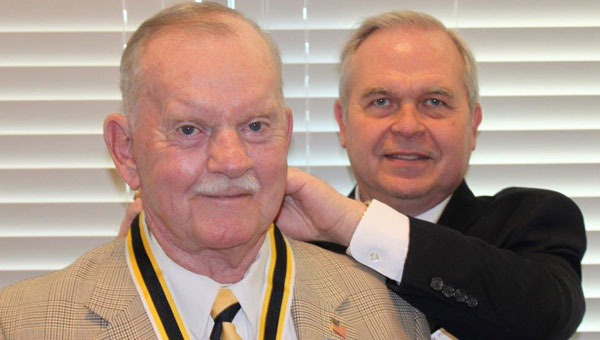 Lt. Col. (Ret.) Robert Glenn Nivens has been inducted president of the Cahaba-Coosa Chapter of the Alabama Society of Sons of the American Revolution.

Nivens was a charter member and founding registrar of Shelby County’s only SAR chapter, which was founded Aug. 22, 2003. His patriot ancestor is Henry Downs, Jr. (1728-1798), who was a captain in the colonial militia and signer of the Mecklenburg Declaration of Independence on May 20, 1775.

“I was so honored to receive the President’s Medallion and Ribbon from ALSSAR National Trustee C.W. Posey, Jr.,” Nivens said. “It is an awesome responsibility to lead the chapter for the next year, hopefully to make it grow and enhance our many missions, which include public awareness and appreciating our American patriotic heritage.”

Nivens enlisted in 1957 at age 17 in the U.S. Army, rising through the ranks from private to lieutenant colonel. He retired on May 1, 1986, after serving 29 years in Germany, Korea, France, two tours in Vietnam and stateside as an infantry commander.

After his military retirement, Nivens became interested in genealogy and historical cemeteries. He is recording secretary of the Shelby County Historical Society, life member of the Combat Infantryman’s Association and many other military organizations. He is on executive committee National Veteran’s Day in Birmingham and support committee Alabama National Cemetery in Montevallo.

Nivens founded the Blue Star Salute Foundation, Inc. after 9/11 when he was strongly motivated to honor those who had fallen in service and their families left behind. He was the BSSFI founding secretary and agent, positions he holds today.

Nivens was awarded the 2012 Col. Leo Thorsness Veteran Recognition Award by the Boy Scouts of America for his service to veterans and as the founder of the Blue Star Salute Foundation, Inc.

Nivens is married to the former Linda Whitfield, whose ancestor William Whitfield wintered with George Washington at Valley Forge. The Nivens live in Harpersville, and they have three children, eight grandchildren and two great-grandchildren.