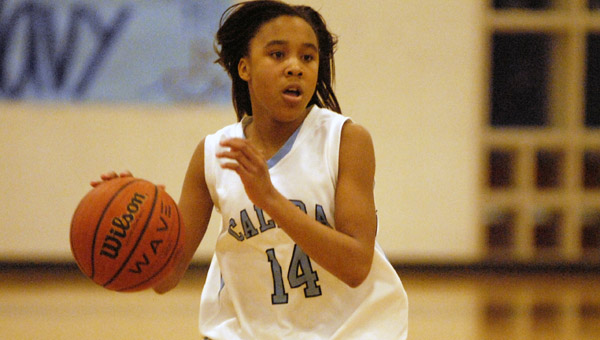 CALERA — The Calera Eagles girls basketball team is just two wins away from capturing the AHSAA Class 4A State Championship, but head coach James Knowles said he knows his squad can’t worry about trophies just yet.

Instead, the Eagles have their eyes turned on powerhouse Anniston, where the Eagles plan to take the Bulldogs one quarter at a time, one play at a time.

“The girls know how good Anniston is,” Knowles said. “We just have to focus on what we do well, and not make mistakes. You’ve just got to be you, and have fun.”

“This year has been wonderful for us,” he said. “I’m very proud. It’s a sense of accomplishment to have moved up to this level.”

The leadership of seniors like A’kia Harris, Keyanna Gayden and Kalen starks combined with the selflessness of younger players has led to the team’s success. That chemistry came together during a game in which the Eagles simply didn’t seem to be enjoying themselves, Knowles said.

“(During a) county tournament game, Oak Mountain whipped us,” he said. “I told (the girls) to just have fun. We played much better. I’m really proud of the seniors; all have done a great job of leading.”

The philosophy of just having fun is simple one, but one that has gotten the Eagles to the brink of a title. It’s also one that Knowles has no plans of changing for a bigger stage.

“Realistically, it’s a basketball game,” he said. “We’re happy to be here. We’re going to give it our best shot, and see what happens. We’ve come a long way, (and) it’s been a dream season.”
The Eagles will take to the court Feb. 26 at 6 p.m. at the Birmingham-Jefferson Civic Center.