NORTH SHELBY — An 11-year-old boy who was reported missing Feb. 24 was found unharmed the same day. 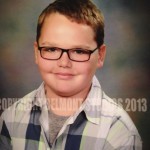 Matthew Aaron was last seen in the area of Shoal Run Apartments on Highway 119 near U.S. 280 the afternoon Feb. 24. Aaron was located the evening of Feb. 24 and returned to his family. In its news release, the Shelby County Sheriff’s Office did not disclose where Aaron was found.