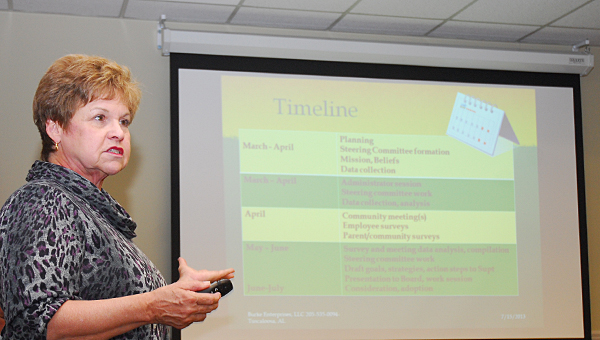 Dr. Marsha Burke makes a presentation to members of the Pelham Board of Education during its Feb. 24 meeting at Pelham City Hall. (Reporter Photo/Neal Wagner)

The Pelham Board of Education likely will seek the public’s input through surveys and open workshops while developing its five-year strategic plan, School Board members announced during a Feb. 24 meeting.

During the meeting, the School Board voted unanimously to hire the Tuscaloosa-based Burke Enterprises firm to help the upcoming school system create its first long-term plan.

Through the hire, Burke Enterprises will formulate a plan to help guide the School Board’s actions over the next several years. The strategic plan will include the school system’s mission, goals, strategies, proposed action steps, benchmarks and communication tools, said Dr. Marsha Burke with Burke Enterprises.

“It will help you stay focused on what (the students’) needs will be and what you can do to help them,” Burke told school board members during the meeting. “The five year plan will set you up until 2019, but by about the three-and-a-half year mark, you will be working on your next plan.”

Pelham Interim School Superintendent Dr. Tim Alford said working with Burke Enterprises is a “time-saving device” as the city eyes a July 1 start date.
“It starts to build on this vision and sense of ownership in our system that we all want to promote,” Alford said.

Burke Enterprises will use several methods to formulate the plan, which will ensure the upstart school system “meets and exceeds” state and federal accountability plans, Burke said.

“The strength of what we’ve been able to do has been because of the quality of people we’ve had on these steering committees,” Burke said.

Burke Enterprises also will hold at least one community meeting in the next few months to gather input from the public. During the meeting, the company will break attendees up into groups of 20-30 people and use “experienced facilitators” to discuss the school system.

“It gets lots of people talking, and we get good feedback from those questions,” Burke said. “We sincerely promise that the constituents of the Pelham school system will have a vested interest in the school system.”

FROM STAFF REPORTS NORTH SHELBY — An 11-year-old boy who was reported missing Feb. 24 was found unharmed the same... read more