The yin and yang of it all 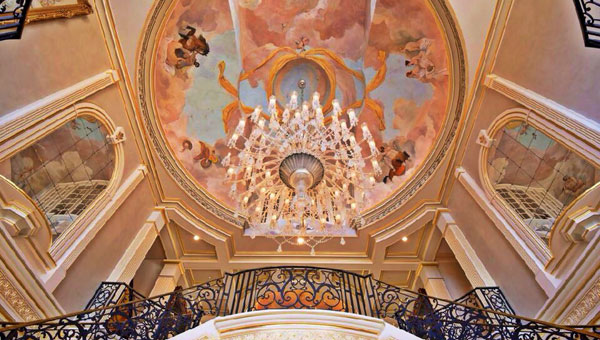 Hand-painted dome ceilings are among the features in this Shoal Creek mansion, which is listed as the largest home on the market in the U.S. (Contributed)

For example, you got your rural farmlands and your not-so-run-of-the-mill $13.9 million “Versailles-style” mansion that’s listed as the largest home on the market in the U.S. It’s the latest display of Shelby County’s yin and yang — small town charm and urban sophistication, simplicity and extravagance.

A browse through photos of the mansion at 7 Montagel Way on the website hurwitzjamesco.com is a wee bit ostentatious for my taste, but no less impressive, with its hand-painted dome ceilings, limestone, marble and maple floors, a 2,000-bottle wine cellar and guitar garden. One of the rooms is a dead ringer for the ballroom in Disney’s “Beauty and the Beast,” where Belle and Beast share their first dance to the tune of “Tale As Old As Time.” I’m not kidding.

The “guitar house” as some call it has received its share of attention over the years, but was thrust back into the spotlight last week thanks to its latest designation. The story caught on in social media, with most commenters admiring the mansion’s opulent beauty. Other commenters, however, had their own ideas for the mansion’s future, i.e. repurposing it as an orphanage or going in as a group to afford a down payment.

As for myself, I think the mansion is the perfect spot for the Reporter’s annual Christmas party. A girl can dream, can’t she?