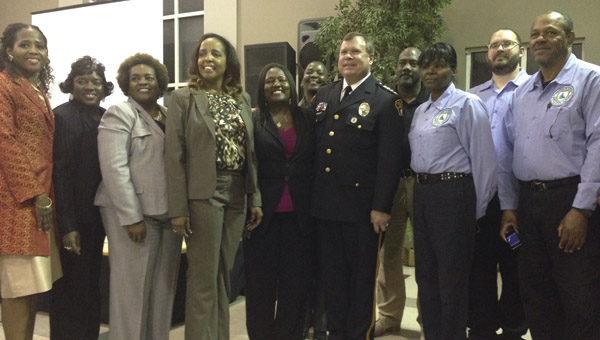 The Chelsea Citizen Observer Patrol (COP) is an all-volunteer organization sponsored by the city of Chelsea and the Shelby County Sheriff’s Office. The group is comprised of about 30 Chelsea residents who, after training, patrol neighborhoods and business districts in an effort to deter crime and assist in emergencies such as auto accidents.  COP also assists with community events such as the annual Chelsea Christmas Parade and last year’s inaugural Blue White Color Dash 5K run/walk.

The honors come on the heels of the city of Chelsea being named one of the 10 best places to live in Alabama, according to a Movoto Real Estate blog. The city ranked at No.  7 and was deemed one of the safest cities in the state, with a crime rate 82 percent lower than the state average.

Murphy, who was appointed chief of police in 2011, said the COP program is a benefit to all law enforcement and the public.

“It’s so important to the deputies and the officers, and we want you to know that you matter. You matter very much,” Murphy said.

“Someone at the conference asked me, ‘Do you still beat people on the bridge?'” Murphy said.

“Sometimes the South, sometimes Alabama, sometimes Montgomery can be seen through that lens of 50, 60 years ago, and it’s a duty of ours to change that persona,” Murphy said.

“At the beginning of the video, you only see white faces, and then you see the progression over time. We’ve come a long way, but progress takes time, and progress is made with people like you, with volunteers who get involved, who speak up,” Murphy said.

“I’m going to take this to the bank, cash it and bring the money to you at your next meeting,” Niven said to laughs from the audience.

The 2013 Chelsea COP honorees are:

Montevallo middle school student dressed up as a variety of black celebrities as part of a living museum. By GINNY... read more