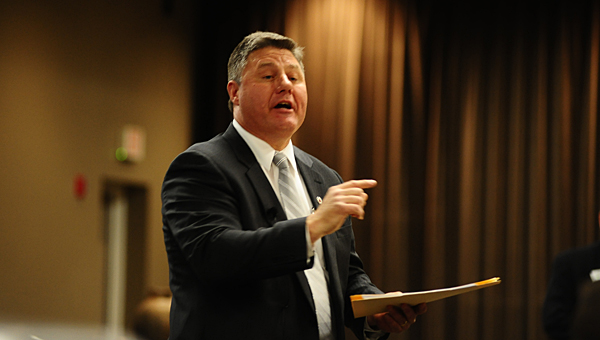 Shelby County saw tens of millions of dollars worth of business and capital improvement projects in 2013, and saw its economy take a step toward pre-recession levels, the county’s manager told local business owners on Feb. 26.

Shelby County Manager Alex Dudchock gave the Greater Shelby County Chamber of Commerce a “state of the county” address during the chamber’s February luncheon at the Pelham Civic Complex and Ice Arena.

During the presentation, Dudchock said the county’s revenues were about $54 million during the 2008 fiscal year before taking a sharp dip during the economic recession in the following few years.

“We’re not there yet,” Dudchock said of the current revenue numbers compared to 2008. “But we are working toward it. We can’t change our spending overnight just because we have an uptick.”

Despite being affected by the economy over the past few years, Shelby County worked to bring several major capital improvements and attract multiple businesses to the county in 2013, Dudchock said.

The county also worked with local and state agencies to construct a new spillway bridge and scenic overlook at Oak Mountain State Park, and also worked to build a new Vandiver-Sterrett Senior Center.

The Shelby County Airport saw the addition of a large new hangar and saw bids awarded on another hanger and a park-and-ride lot. In Montevallo, the county worked with the University of Montevallo and the city to complete projects such as the UM on Main building and a new bookstore.

The county also worked to move the DAY Program for at-risk students into the second floor of the new Alabaster YMCA building and also saw Hibbett Sports complete its 360,000-square-foot distribution facility in the Shelby West Corporate Park.

“We have had a lot of opportunities and a lot of challenges in the county,” Dudchock said. “We are only able to meet those because we’ve got staff members in the room today who work hard.”

Maddie Bentley works with a trainer at RPM Fitness in Hoover. She will competing in the USA Olympic Weightlifting Youth... read more