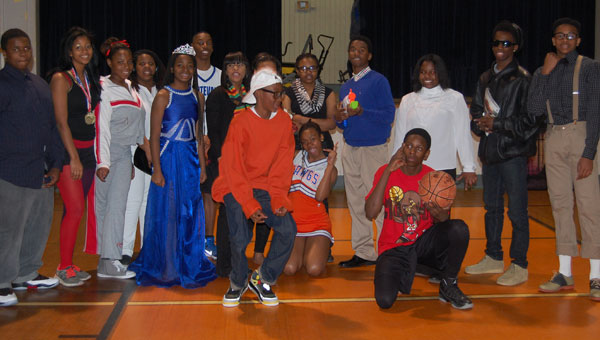 Montevallo middle school student dressed up as a variety of black celebrities as part of a living museum.

MONTEVALLO—Montevallo middle school students put on a production filled with singing, dancing and a variety of celebrities Feb. 26 in honor of black history month.

Tamara Wilson, a sixth grade teacher who helped to organize the event, acted as museum director. During the program, she approached the students and asked the significance of their character.

“I tried to see who resembled each person,” Wilson said of the process for choosing participants. “They all did such a good job.”

Following the living museum production, students performed a wide range of talents such as dancing, drumming and singing.

The Montevallo middle school choir performed classic spirituals “Swing Low, Sweet Chariot” and “Wade in the Water.” Soloists sang “His Eye is on the Sparrow” and “This Little Light of Mine.”

By DREW GRANTHUM/Sports Writer The story above involving Maddie Bentley was a fun one to work on, because of how... read more