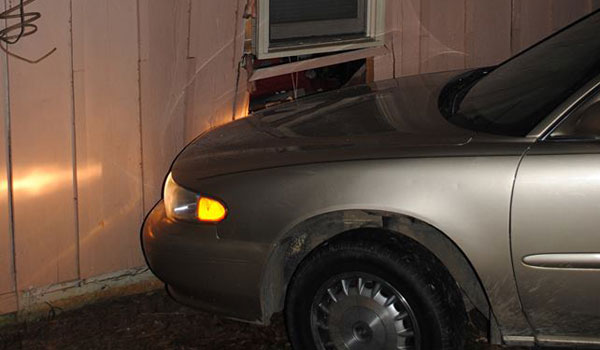 Police apprehended three suspects after they crashed into the back of a civilian’s house (Contributed).

CALERA—Police apprehended three suspects Feb. 25 after a high-speed car chase, which began at approximately 9 p.m. in Chilton County and ended when the suspects crashed into the back of a woman’s home in Calera.

No one in the house was injured, police reported.

Shane Mayfield, chief deputy at the Chilton County Sheriff’s Office, said that the suspects “threw items out of the window” during the chase, which started in Chilton County, went down U.S. 31 and ended on 20th Street in Calera.

“The suspects lost control of the vehicle, and ended up in the home,” said Mayfield.

The suspects are facing charges for drug trafficking and attempting to elude police, said Mayfield. As of Feb. 27, the suspects had not yet been formally charged.

“The chase ended up in Calera,” Sean Lemley, Calera chief of police, said. “Our officers assisted in apprehending all three suspects.”

According to Lemley, the suspects could also face charges of reckless endangerment and reckless driving.

“We just arrived on the scene when they crashed into the house,” Lemley said.

Chilton County deputies and Calera police officers helped the family board up the damaged area of the house, and offered bookbags and stuffed animals to the two children in the home.

By JAN GRIFFEY/Editor COLUMBIANA — Thanks to the quick action of a concerned citizen, a Columbiana man is in jail,... read more