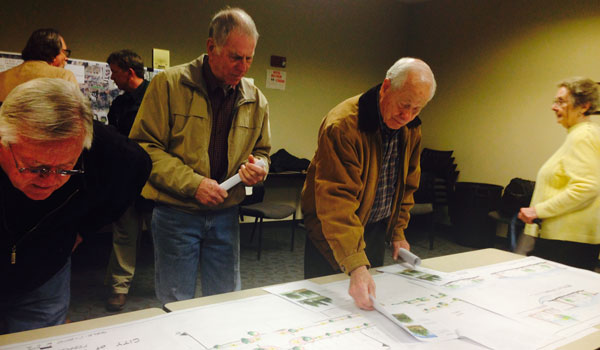 During the Feb. 28 meeting, project information and maps were available to the public. (Ginny Cooper/ For the Reporter)

MONTEVALLO—Though many citizens were excited about the proposed Main Street Improvement Project, some expressed concerns during a Feb. 28 public hearing hosted by ALDOT.

The proposed project would enact roadway improvements on Main Street from West Street to Bloch Street in Montevallo, such as widening the street by making all northbound parking parallel, adding a variety of trees and greenery, and moving all utilities to the back of the buildings.

During the open house, the public was able to review project information and maps. ALDOT staff and design consultants were on hands to answer questions about the project.

“We had a good crowd,” city clerk Herman Lehman said. “We even had people come in before the official start time.”

Many citizens and business owners were concerned about the shortage of parking and the addition of all parallel parking on the northbound side of Main Street.

“What I want to know is, who’s going to teach parallel parking?” joked Gavin Bethea, who lives right outside of Montevallo city limits.

“There aren’t ten people in this room who can parallel park. I think it’s going to be an improvement, but it will cause some growing pains,” Steve Gilbert, executive director of the Montevallo Chamber of Commerce, said.

Bruce McClanahan, owner of Main Street business House of Serendipity, feared that the improvements would force his business to close.

“It’ll kill it,” McClanahan said. “Unless (customers) can park in front, they’ll drive on by and go to Alabaster.”

Phil Hurst, owner of Falcon Art Supply in Montevallo, feared that many of Montevallo’s older citizens would have trouble with the new parking.

“I’m an old man, but I don’t have a problem driving. There are a lot of older people who are going to have a hard time,” he said.

Chuck Kelly, a landscape architect for the project, said that the firm redistributed parking to side streets to ensure there was a zero loss of parking spaces.

By NEAL WAGNER / Managing Editor A 22-year-old Maylene woman has been charged with one felony count of reckless murder... read more