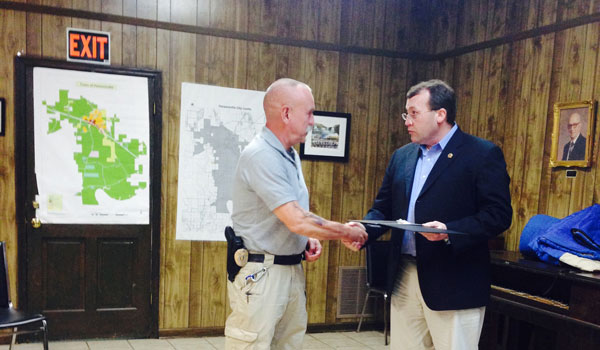 Allan Rice, executive director of the Alabama Fire College, presented a certificate to Harpersville chief of police David Latimer and thanked him for his service to the organization. (Ginny Cooper / For the Reporter)

Latimer made “significant contributions” to the development of canine training and fire investigation training and testing courses, which would not have been possible without his expertise in the fields, Rice said.

Rice stressed the unique nature of the training programs, which are “not really like anything in the country,” he said.

Rice and his colleague Rod Glover traveled from Tuscaloosa to Harpersville to present the award to Latimer at the March 3 Harpersville City Council meeting.

“I just wanted to let Harpersville understand how important this contribution is to (the Alabama Fire College),” Rice said.

Mayor Theoangelo Perkins also praised Latimer, and said his service in the community has been a “very valuable asset” to Harpersville.

Spring has sprung in Shelby County

By GINNY COOPER / Staff Writer Spring is just around the corner! And after the unbelievably cold winter we’ve had... read more