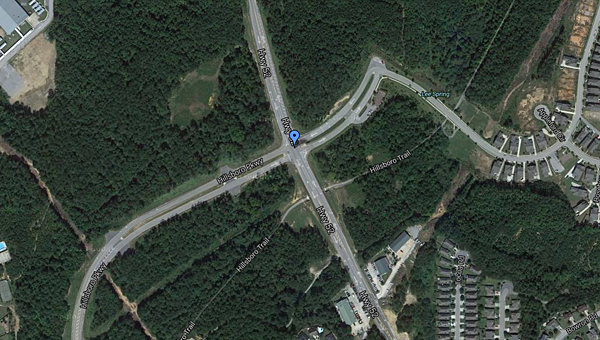 The US Steel company is funding a new traffic light at the intersection of Hillsboro Parkway and Shelby County 52 in Helena. (Contributed)

Drivers on Hillsboro Parkway soon will be able to more easily turn onto Shelby County 52 in Helena after the US Steel company agreed to fund a new traffic light at the intersection of the two roads.

“We partnered with US Steel on this, and it won’t cost the city anything out of pocket,” Hall said during a March 4 interview. “We are shooting to have the light up and ready by the time school starts in August.”

Hall said the traffic light will provide another outlet for drivers traveling to and from Helena High School and Helena Middle School, reducing congestion at the intersection of Hillsboro Parkway and Coalmont Road.

“We needed an alternate route to get kids and parents into and out of the schools,” Hall said. “This should help cut down on some of that congestion.”