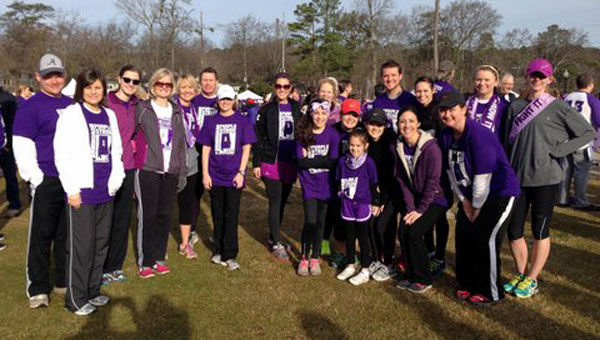 “My mother was diagnosed with pancreatic cancer in 2008,” said Kathryn Brekle, third grade teacher at Mt. Laurel Elementary School. “I wanted to do something to honor her fight. I searched events and didn’t find any in Alabama. I learned frightening statistics, however.”

Seventy-five percent of pancreatic cancer patients die within a year after diagnosis. The five-year survival rate is still single digits after 40 years. Brekle organized a 5k run in Mt Laurel on Mother’s Day weekend in 2009.

“We raised $9,000 for research,” Brekle said. “My mother was able to attend that first event. She always encouraged others going through a hard time. I feel like I’m carrying on her legacy.”

After that first event in Mt Laurel, the Birmingham affiliate of the Pancreatic Cancer Action Network asked Brekle to be their event coordinator. Since then, they have raised nearly $246,000.

“We have an awesome group of volunteers. They are passionate about raising awareness and funds,” she said. “We are working to double the five-year survival rate by 2020.”

“We were fortunate to have two years with her after her diagnosis. Some people only have days, weeks or months with their loved ones after diagnosis,” she said.

Beth Ansley, principal of Mt. Laurel Elementary said, “This year, a 30-member team from our school participated in the PurpleStride 5K and Fun Run, which Brekle still organizes. Our PanCan team raised $1,175.”

“The first event without my mom was tough, but I keep volunteering,” Brekle said. “I know the hopelessness I felt when I wanted to do something to honor her and couldn’t find an outlet. Now families are able to honor their loved ones and feel connected to others. That makes me feel like I’ve accomplished my original goal.”

Seniors have choice for fitness programs