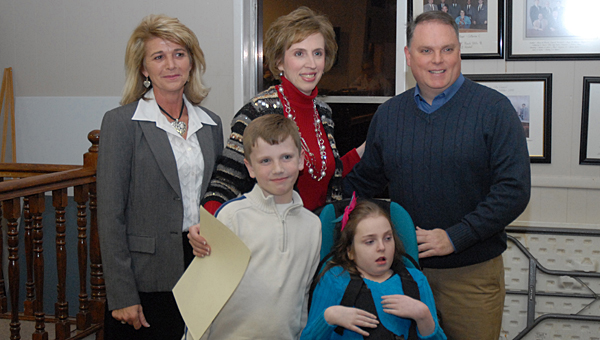 Drew Ann Long will never forget her worst trip to the grocery store.

In 2006, Long loaded her 6-year-old daughter, Caroline, and her 3-year-old son, Matthew, into the car for a trip to the market closest to the family’s Alabaster home. While most parents can attest to the difficulties of wrangling a few children while checking items off their shopping lists, Long was faced with a dilemma most mothers never face.

Caroline was born in 2000, and was diagnosed four years later with Rett’s syndrome, a nervous system disorder affecting movement and expressive language. As a result of the disease, Caroline is not able to walk, and relies on a wheelchair for mobility.

“Caroline was in a wheelchair, and I had my son with me, who was 3. It was a disaster trip,” Drew Ann said as she recalled the day the family’s future – along with the world’s special-needs community – took a drastic turn. “I was trying to push the buggy and Caroline’s wheelchair at the same time. I always felt like everyone was staring at me when I went to the store.

“My son ran off and then I ran into a display in the store, and that’s when I thought ‘This is ridiculous. This should not be this way,’” Drew Ann added. “When I got home, I told (my husband) David ‘I almost lost Matthew today, I ran into a display, this has got to change.’”

For the first few years of Caroline’s life, Drew Ann’s trips to the grocery store were not different from any other parent’s. Traditional shopping carts offer small seats for infants and toddlers, which provided the perfect solution each time Drew Ann and Caroline went shopping together.

But as Caroline grew, problems began to arise.

“I think the saying goes ‘You don’t know what you don’t know,’” Drew Ann said. “It’s not something I really thought about until I was faced with it.”

When Drew Ann began her journey to help Birmingham-area mothers facing the same dilemma she was, she originally thought the task would be easy.

“When we started out, God was good to make me naïve,” Drew Ann said. “I thought it would be easy. I thought ‘A shopping cart is out there somewhere that serves this purpose, I just have to go out and bring it to Alabaster, Alabama.’”

After searching all over the world for a shopping cart capable of seating an adolescent or adult special-needs individual, the Long family came up with no results.

Instead of feeling defeated, the family decided to do whatever it took to make the cart a reality.

“I never thought I would do what I did. Never in my wildest dreams did I think we would get to where we are today,” Drew Ann said. “There is not one part of this journey that has been easy. But it was worth every bit.”