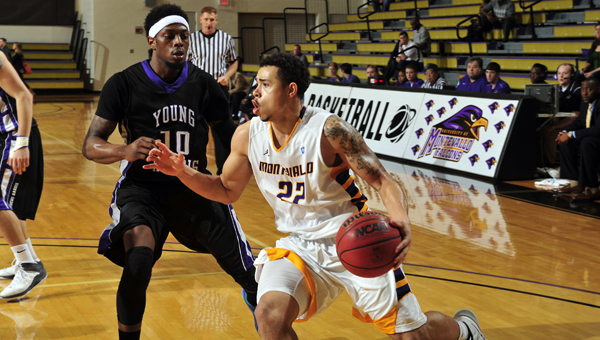 Ryan May (22) and the rest of the Montevallo men’s basketball team will face Georgia Southwestern, the No. 6 seed, in the NCAA Division II Southeast Region tournament quarterfinals Saturday, March 15 at the USC Aiken Convocation Center in Aiken, S.C.
(Contributed/University of Montevallo)

MONTEVALLO —  The University of Montevallo men’s basketball team earned its fifth consecutive berth to the NCAA Division II Men’s Basketball Tournament and its ninth bid in the past 11 years March 9 after earning an at-large bid as the No. 3 seed in the Southeast Region.

Tip-off times for the quarterfinal contests will be announced later this week.

The Falcons, who claimed the Peach Belt Conference West Division championship, split a pair of regular season meetings with the Hurricanes (20-10) during the regular season. Montevallo defeated Georgia Southwestern 61-59 at home Jan. 15 at Trustmark Arena. The Falcons fell to the Hurricanes 83-74 on the road Feb. 12 in Americus, Ga.

The Falcons, who have advanced to the NCAA Division II Men’s Basketball Tournament nine times in program history, own an 18-8 all-time record in the tournament.

All nine of the Falcons’ appearances in the NCAA Division II men’s basketball tournament have come in the past decade under head coach Danny Young, who captured his 300th career win March 7 after guiding Montevallo to a 85-80 win over Francis Marion University in the Peach Belt Conference tournament quarterfinals. Young picked up his 250th win at Montevallo in the Falcons’ 96-87 double-overtime win over GRU Augusta in the semifinals March 8.

Montevallo reliever Edward Brandsema picked up his third save of the year in a 5-2 win over UAH March 5.... read more