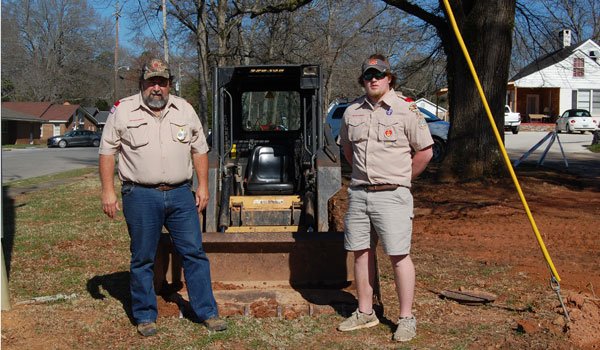 Randall Hunt with troop leader Sid Wheeler at the construction site (Ginny Cooper/ For the Reporter).

The project is extensive: According to plans, Hunt will change the face of Columbiana City Hall by adding a park in tribute to Scoutmaster Robert “Bob” Hume, a lieutenant colonel in the Air Force and longtime boy scout troop leader.

The park will include a flag plaza, a gazebo plaza, revitalized sidewalks, a granite memorial to Hume and a variety of shrubs and greenery.

Though Hunt is in charge of overseeing the project as well as acquiring the funds and materials, the finished area will be a compilation of a lot of hard work from Columbiana Troop 560.

Paul Morris built the gazebo that will be featured in the park as an Eagle Scout project, and Zach Treadway landscaped the area around City Hall by installing berms and shrubs to earn his Eagle Scout badge in 2007. In addition, the current members of Troop 560 have put over 500 hours and manual labor into the project already, according to troop leader Sid Wheeler.

“There’s a lot of work to be done, but work’s just work,” said Wheeler, who said the most difficult part of the project is finding funds and materials.

Handley reported that there has been a “great response” in the community to the project, and citizens have donated labor, equipment, materials and supplies to aid in the building of the park. In addition, landscape architect Bob Enoch designed the park pro bono for the project.

USA Block in Defuniak Spring, Fla., heard about the project and offered the necessary 2,500 pavers at less than half price, Handley said. However, Hunt puzzled over how to get the pavers from Defuniak to Columbiana, until Columbiana citizen Freddy Moody offered to make two trips in his tractor-trailer for only the cost of gas.

Right now, Hunt is mainly concerned about obtaining concrete for the project.

“We’re hoping to get some concrete. Maybe a company will give it to us at a discount,” Hunt said.

Wheeler estimates the troop will be able to unveil the finished project during Liberty Day, which is set for June 28 if all goes according to plan.

“This project is going to beautify City Hall, and establish another area of pride within the city,” Handley said.