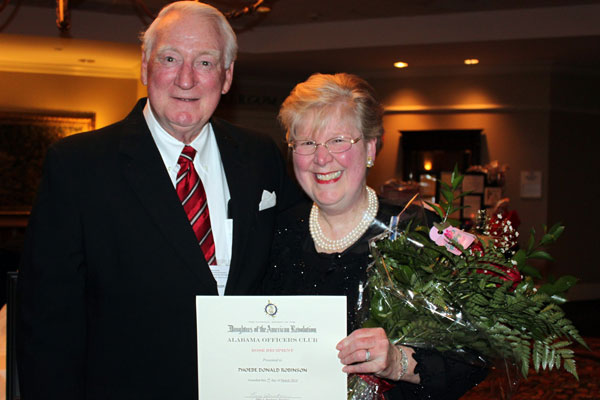 COLUMBIANA—Phoebe Robinson was “stunned” when she found out she was the prestigious Rose Recipient at the 2014 Lane Chapel Candlelight Dinner.

“It was a total surprise, I absolutely did not know. I was stunned, because I consider myself a pion in the DAR,” Robinson said.

The Rose Recipient is the highest honor given by the Alabama Officers Club, commonly called the AOC, of the Daughters of the American Revolution.

Robinson, who has been involved with the DAR for more than a decade, received the award for her work documenting the history of the AOC. Robinson penned and published the book “1998 – 2014 Alabama Officers Club Daughters of the American Revolution Volume Three.” The full-color publication records year-by-year highlights of the club’s history from its founding in 1928, a history of the Lane Chapel, presidents of the organization, minutes from past presidents and administrations, the bylaws of the AOC and names of all past Rose Recipients.

The 62-page book took a year to complete, Robinson said, and went to press Feb. 1.

Proceeds from the sales of the book benefit the Nan Roberts Lane Chapel, located on the grounds of the Kate Duncan Smith School in Grant, the only DAR school in the state.

Kate Duncan Smith School is an “amazing place,” Robinson said, which aids in “helping children in remote mountain areas receive an education,” according to the website for the Alabama DAR.

Rita Reid of Montevallo was the 2013 Rose Recipient. Reid was vice president of the AOC when the president, Libby Clay, died unexpectedly before her term was complete. Reid received the award for stepping up and successfully completing the term.

This is the second year in a row for women from the David Lindsay Chapter to be awarded the Rose Recipient, something that Robinson said is “really, really rare” and “truly amazing” for the small chapter, which only has approximately 50 members.