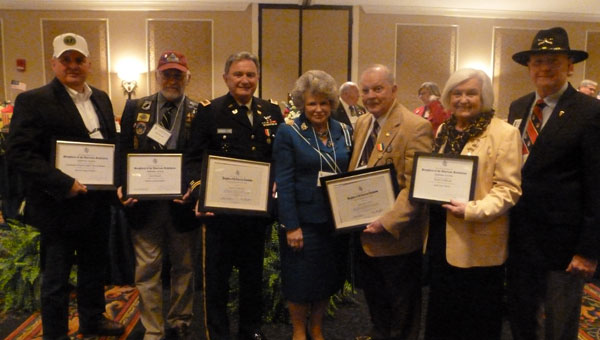 To celebrate the Vietnam War’s 50th anniversary, the Alabama Daughters of the American Revolution honored the war’s veterans and their families at the National Defense Luncheon at the 116th Annual State Conference held at the Auburn Conference Center. ASDAR State Regent Connie Grund and National Defense Chair Ann Bandgren welcomed attendees to a day of remembrance for the 58,271 men and women and their families who gave the ultimate sacrifice for their country.

Lt. Gen. (Ret.) James M. Link, U.S. Army, was the keynote speaker. A Vietnam War veteran, Link spoke pointedly on the war as he served as company commander in the 173rd Airborne Brigade.

After Link spoke, Melvin R. Shinholster of Hoover and Lt. Col. Robert Glenn Nivens of Harpersville were awarded the first DAR Distinguished Citizen Medals ever given in Alabama. The DAR established the new award on January 1, 2014, to honor worthy citizens who for extraordinary service in defense, promotion and/or preservation of our American heritage of freedom.

Shinholster was a helicopter pilot in Vietnam who flew 987 combat missions in hostile territory. Retired from Bellsouth, he is president of the Blue Star Salute Foundation, Inc. (BSSFI) and was the 2013 Alabama Veteran of the Year by the Military Officers Association of America.

Nivens rose from the ranks from private to lieutenant colonel after serving 29 years in the U.S. Army. He was awarded the 2012 Col. Leo Thorsness Veteran Recognition Award by the Boy Scouts as the founder of the BSSFI.

Also honored with Certificates of Merit were the Patriot Guard Riders represented by Rick Brandt and Command Sgt. Maj. Barry Blount and Rachel Clinkscale, president of the Gold Star Wives, for their tireless service honoring fallen heroes, their families, support of the military and veterans. Col. (Ret.) Bob Barefield was also recognized for his devoted work as chairman of the Alabama National Cemetery Support Committee.

Afterwards, Vietnam veterans were recognized at the Vietnam Memorial Wall presentation given by a National Park Service volunteer.

Mary Elliott and Buell Cobb at Redlawn Farm, their home in Fourmile. Buell will speak and autograph his book, “Sacred... read more