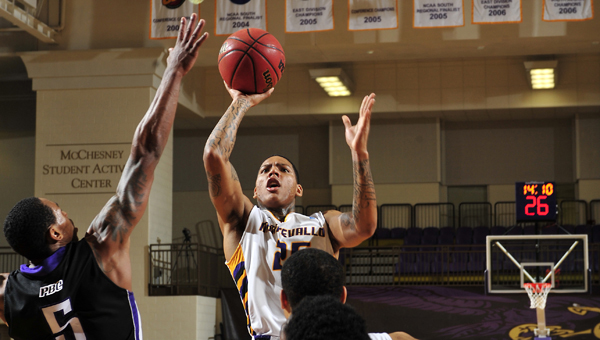 AIKEN, S.C. – The NCAA Division-II Southeast Regional’s first semifinal game on March 15 pitted the Lincoln Memorial University Railsplitters against the University of Montevallo Falcons. The game was a tight battle the entire way, but Montevallo advanced to the Sweet Sixteen after a 98-86 win.

The first half was defined by both teams’ prolific offenses. In the first 20 minutes, LMU shot an astounding 60.6 percent from the floor and 62.5 percent from beyond the arc. They also made all four of their free throw attempts.

Montevallo’s first half stats were almost as impressive, shooting 56.3 percent. However, they were only able to covert three of their nine three-point attempts.

At the break, the Falcons found themselves on the wrong end of a 49-46 score. The first half was tightly contested; the score was tied on 14 separate occasions, and there were four lead changes.

Troran Brown and Orlando Brazier were the offensive catalysts for Montevallo in the first, scoring 13 and 12, respectively. Brazier added three rebounds, while Brown added three assists.

In the second half, both teams continued to put on a spectacle, and neither team was able to gain any significant advantage.

For the first 17+ minutes of the second frame, the score stayed within five points. Unfortunately for the higher seeded Railsplitters, Montevallo was the team that was eventually able to pull away, winning by the final margin of 98-86.

The Falcons were led by Brazier. The senior center from Chino, California had his best game in purple and gold. He finished with a career-high 31 points. He was outstanding from the floor, making 11 of his 14 shots for a remarkable shooting of 78.5 percent. He also grabbed 11 rebounds to lead the team and record his fifth double-double of the season. He also shot 81.8 percent from the free throw line.

Brown, the Peach Belt Conference Player of the Year, scored 21 points in the contest.  He also led the Falcons in assists, dishing out six helpers.

Ryan May (22) and the rest of the Montevallo men’s basketball team will face Georgia Southwestern, the No. 6 seed,... read more