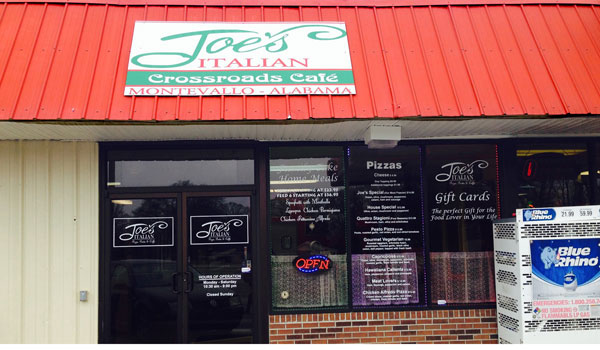 The restaurant, located at the intersection of Highway 119 and Shelby County Road 22, will focus primarily on takeout orders, and has a menu featuring the most popular items from the bigger Alabaster location.

However, Joe’s Italian Crossroads Café does have the capacity to seat 24 people, and the Montevallo City Council recently approved an ABC license for the location.

“(Opening day) has been going good. It’s pretty much what we expected,” Sonia Bertolone, owner of the restaurant said.

Bertolone said the restaurant did not formally announce an opening day, as they wanted to work through any issues before the restaurant was flooded with customers.

“We haven’t really told anyone. We wanted to keep it low key until we worked all the kinks out,” Bertolone said.

So far, the “kinks” include problems with the ice maker and point of sale terminal, both of which the restaurant has worked to quickly fix.

Despite the lack of advertisement, the Joe’s Italian received over 50 orders in the first two hours of business, with the lasagna, chicken parmesan and eggplant being the most popular dishes.