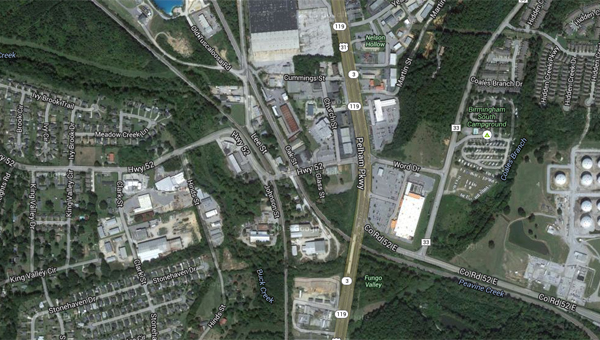 Area of proposed shopping center that CDA will focus efforts on upon formation. (Contributed)

PELHAM—Pelham is well on its way to having a Commercial Development Authority to replace the Industrial Development Board, city officials confirmed on March 20. Pelham city councilman Ron Scott recommended five people to form the new board during a March 17 work session, and the city is currently undergoing the legal application process to incorporate the CDA.

“We have the language in place to create the CDA,” said Scott during a March 20 phone interview. “The next step is filing the papers with the names we recommended.”

According to Scott, the Pelham City Council will call a meeting as soon as their legal council confirms the papers “were properly filed and the CDA has been incorporated.” He is optimistic this will occur “in the next 30 days.”

Once formed, the CDA will immediately start evaluating retail gaps and developable land, as well as developing strategies to “put landowners and developers together” in order to gain retail space.

“A big priority is development of land owned by the city in front of Summer Classics,” Scott said in reference to a five-acre parcel of land along the front edge of U.S. 31, on which the city plans to build a retail shopping center.

Alford is currently the interim superintendent of Pelham City Schools and has an extensive economics background, including a tenure as chairman of the Alabama State Workforce Investment Board. Scott also indicated Alford’s experience with city government as the former mayor of Enterprise, Ala.

As former director of Birmingham’s Office of Economic Development, Scott noted Adams’ experience in “recruitment and retention of retailers.” Similarly, current general manager of the Riverchase Galleria Martin has connections with a variety of retailers.

Long-time Pelham resident Glenn has served on city boards, and Martin worked at Moore-Handley as vice president of operations.

The Alabama House of Representatives likely will pass a bill to allow Saddle Lake residents to vote on annexing into... read more