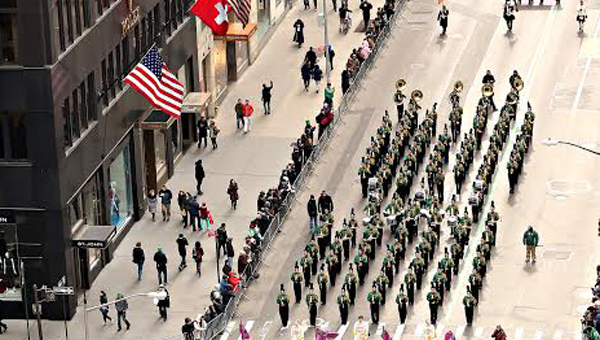 “The kids were excited by the crowds, which were 20 to 30 people deep in some parts,” said Pelham High School Band director Jeff Burnside. “It was great to perform in front of that many people.”

The band spent time after school conditioning and preparing songs for the three-and-a-half hour march. For parades of this nature, bands often will play one or two songs separated by a drum cadence. Burnside noted the band is “deep into concert preparations,” so he chose songs familiar songs from the band’s field show.

“I chose songs with a nice tempo and something the crowd would enjoy,” Burnside said of his selections.

However the cold, not the length of the march, posed the biggest challenge to the band. New York City temperatures hovered around freezing on the day of the parade.

“The hardest part was the one-and-a-half hour wait in the staging area,” said Burnside. “Kids figured out ways to get extra layers under their uniforms and hot hands in their hands and shoes,” he said, adding the band forgot about the cold once marching began.

“It was a neat experience to march past the buildings and landmarks the kids are familiar with,” said Burnside of the parade route, which starts in Times Square and runs past Rockefeller Center, St. Patrick’s Cathedral and along Central Park.

In addition to the parade, the band had the chance to experience some of the other attractions New York City has to offer, including sightseeing, a dinner-cruise on the river, and two Broadway plays in which the band was able to “interact on a one-on-one level with the cast” during a post-production question and answer session.

Although “a little tired” from the more than 20 hour bus ride home, Burnside said the band had a “really really good time” in the city, and will definitely do the trip again in the future.