Pelham reaches out to Hispanic community 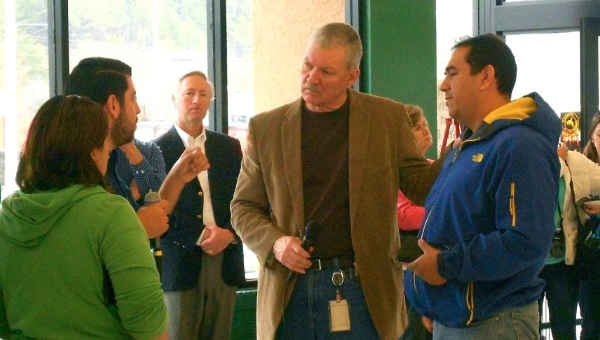 PELHAM—Pelham city leaders along with the Hispanic Interest Coalition of Alabama and Birmingham Immigrant Alabama Movement held a March 23 community meeting at Mi-Pueblo Supermarket. As part of an effort to reach out to and involve Pelham’s Hispanic community, the meeting discussed matters of importance to the community and to the city as a whole.

Pelham Mayor Gary Waters, councilman Maurice Mercer, interim school superintendent Dr. Tim Alford and school board president Rick Rhodes were in attendance, along with other leaders of Pelham and the Hispanic community.

The meeting focused on encouraging participation from the Hispanic community in city activities and discussion about the new Pelham City School System.

According to the 2010 United States census, nearly 15% of Pelham’s population is Hispanic. Waters expressed concern that this population is not represented in city activities. To encourage participation, he promised an interpreter at Pelham’s quarterly town hall meetings and gave permission to the media to republish the Pelham newsletter in Spanish.

“Our relationship has to extend beyond the confines of this building,” said Waters.

“Today is the first step,” said Mercer. “If you work with us, we will make Pelham a better place for all.”

“It is an absolute must that every child in our system be prepared to do what they want to do with their lives,” said Rhodes, adding with the participation of the entire community, Pelham will have a “world class school system.”

Members of the Hispanic community voiced support of Pelham’s outreach and expressed a desire for a continued working relationship.

“Let’s work together for a better city, because that’s what we all want,” said Pelham resident Glenda Rosa.

By KATIE MCDOWELL/General Manager A group of Pelham residents whose children attend Chelsea schools have asked the Shelby County Board... read more