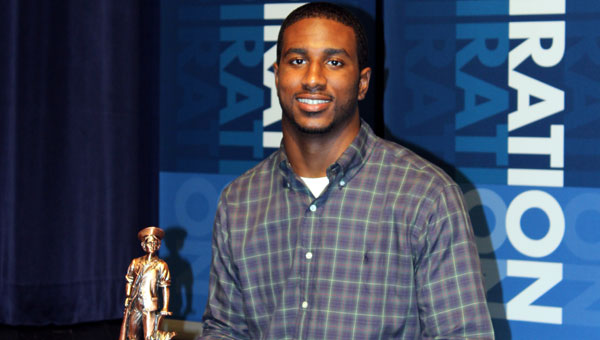 CALERA – On March 13 at 1:30 p.m. Ronnie Clark headlined an assembly to encourage the students of Calera Intermediate School to set goals and excel academically. Clark is a football standout at Calera High School who has signed to play football at the University of Alabama. He played in the Under Armour All-American Game and was ranked 48th nationally by Rivals.com and 71st by ESPN. His most recent award is the Inspiration Award from USA Today.

During the assembly, Ronnie spoke about the importance of doing your best academically. At the close of the assembly, students received bracelets with their graduation year. Banners were hung in the halls showcasing future graduation years also. Faculty and staff hope that this assembly encouraged the students to always do their best and set a goal to graduate high school.