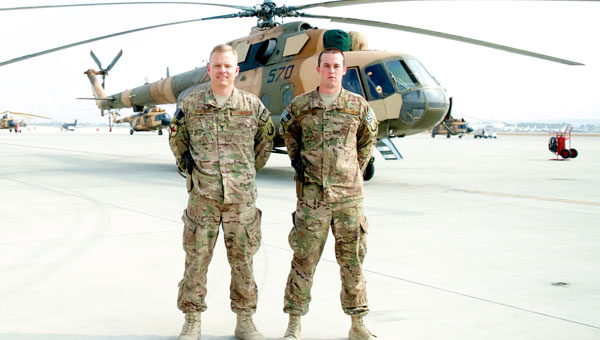 It is a small world. What are the odds of two Alabama boys from Columbiana meeting 8,000 miles from home in Afghanistan? Some would say it is a God thing, others a coincidence.

For Colonel Chris Stricklin and Airman Clint Crumpton, it was a blessing that made them feel a little closer to home.

Stricklin grew up in Shelby, son of Gary and Patsy Stricklin. Chris and wife, Terri, graduated from Shelby County High School in 1990. Stricklin is a Command Pilot with more than 2,000 hours in the F-15C Eagle and F-16 Viper, and currently serves as the chief of staff, NATO Air Training Command – Afghanistan.

Airman Clint Crumpton, age 22, is the son of Susan and Gary Crumpton, Jr. of Columbiana. He graduated from Cornerstone Christian School.

“I joined the Air Force because I wanted to do something that would make a difference,” said Crumpton. “I feel like we owe it to those who served before us to do our part in serving our country.”

Kabul is Crumpton’s first war zone deployment. He serves as security forces, the guardian angels that watch over Americans advising Afghans “outside the wire,” areas not within U.S. compounds. Crumpton has been specially trained and recently was certified by Stricklin as a convoy operator.

The two men have many connections. Stricklin went to school with Scott, Crumpton’s uncle. Clint’s good friends are Stricklin’s niece, Hailey Bentley, and fiancé, Chase Gannon. Clint’s grandmother, Dale Roe, rents from Stricklin’s good friend, Corley Ellis. Each knew the other was in Kabul, but Kabul is a big city. One day a co-worker introduced the men. They talked and realized they both were from Columbiana. Their families and friends from home were elated they met.

“Dale was so happy that she called me the other morning,” said Corley Ellis’ wife, Julie. “It is truly a blessing her grandson has Chris’ support over there. It’s such a small world.”

To let these men know they are not forgotten, please send mail to: Clint Crumpton, NATC-A/KAIA, APO AE 09320.