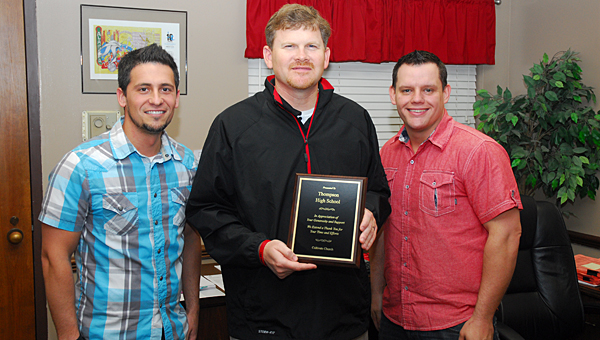 After humble beginnings meeting in the lead pastor’s residence, Alabaster’s Cultivate Church has grown into its own church building off First Street Southwest, marking the church’s first “brick and mortar” location since its 2011 founding.

“Once you move into a brick and mortar building, people know you have roots in the community,” Pastor Brandon Matthews said while meeting with Thompson High School Principal Dr. Daniel Steele on March 21. “It lets people know you aren’t going anywhere.”

Matthews and fellow church pastor Brandon Doss moved to Alabaster with their families in 2011 to plant the Cultivate Church. For several months, Matthews hosted church services in his house in Alabaster’s Sterling Gate subdivision.

Although Matthews and Doss originally made an agreement with former THS Principal Robin Thomas to use the school as a meeting place, Steele said he had no doubts about continuing the agreement when he became the THS principal.

“One of the things that is true about a local school system is we take on the identity of the community,” Steele said. “When we form partnerships with the community, that is a good thing.”

Doss and Matthews presented a plaque thanking Steele and THS for allowing the church to meet there for the past few years during their visit to the school on March 21.

“It’s actually an old doctor’s office,” Matthews said. “We gutted it and rebuilt it from the ground up. We resprayed and relined the parking lot because it hadn’t been used in a while.”

On Easter, the church, which has seen its attendance grow steadily over the past few years, will begin holding two services each Sunday.

Pelham’s Personnel Board is conducting a thorough review of the city’s Civil Service Law to identify and revise portions that... read more