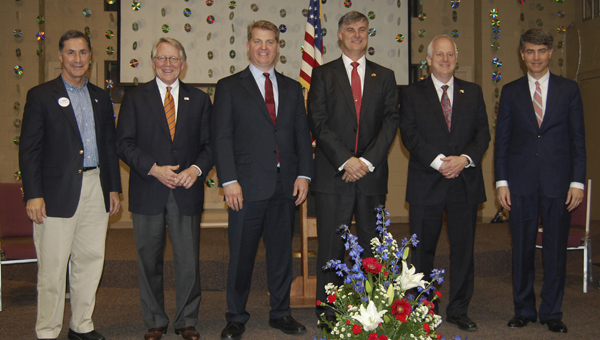 The candidates share similar stances, among them repealing Obamacare, reducing government spending and restoring morality in Washington, D.C., so the forum became a stage for the candidates to offer brief summaries of their lives, and why they are best equipped to succeed Bachus.

Beason, a state senator from Hartselle, said the Republican party’s penchant to compromise on its core beliefs for the past few years has resulted in backsliding, not progress.

“You have to vote for the person you believe will get the job done,” Beason said. “It’s very easy in politics to say you support something.”

Mathis, an orthopedic surgeon with a practice in Alabaster, is the first person in his family to graduate from college. Mathis said he is living the American dream, but that dream is under attack because of two things — Obamacare and the national debt.

“The president lied to us. This law is about power,” Mathis said of health care reform.

Brooke, Harbert Management Corporation executive, said Congress has become lazy and its members are more interested in keeping their post than seeking solutions for the country’s problems.

“I’m not going to Washington for a job. I’ve already got one,” Brooke said. “I feel the wind at my back that I need to go serve.”

DeMarco, a state representative from Homewood and a soon-to-be first-time father, said Washington is need of a candidate who is accessible, approachable and visible throughout his or her term.

“I was born here, I was raised here, I went to school here, I have a plot at Elmwood Cemetery, I’m not going anywhere,” DeMarco said.

Shattuck, an attorney, said fixing Congress should be the first priority to solving government dysfunction.

“It’s almost moot to discuss issues and solutions until we fix Congress,” Shattuck said, adding that Republicans and Democrats have transformed politics into an unproductive “us against them” battle.

Palmer, chief development officer for the Alabama Policy Institute, also is the first in his family to go to college. Palmer said if elected he would focus on repealing Obamacare, cutting government spending and growing the economy by tapping into the country’s natural resources.

The Republican primary is set for June 3. There is no Democratic candidate for the seat. A runoff, if necessary, is set for July 15.