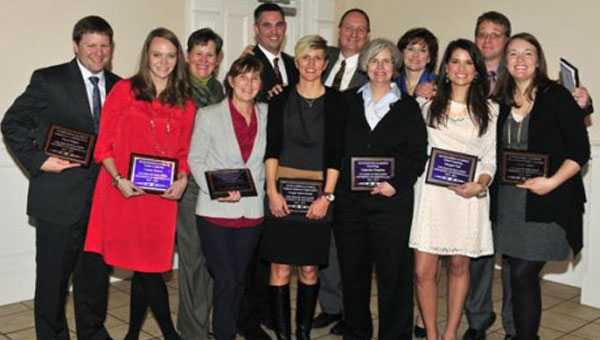 Photo and article courtesy of the University of Montevallo. (contributed)

MONTEVALLO – The College of Education at the University of Montevallo recently honored a number of its alumni at a dinner held in conjunction with homecoming activities, including several Shelby County School District employees.

Maegan Vick was the recipient of the School Counseling Award. She graduated from the University of Montevallo with a bachelor’s degree in elementary and special education in 2008 and a master’s degree of education in counseling in 2010. Vick started her career as a special education teacher before becoming a school counselor. She has been a counselor with Shelby County schools since 2010, currently serving at Helena Elementary.

In addition, she has worked as a group counselor for the Juvenile Detention Center and has co-led supervision groups in graduate counseling clinical courses. Vick has presented at the Alabama Counseling Association’s “Counselor Roundup” every year since 2011, and in 2013, she co-authored a chapter on social isolation in the textbook “Applying Techniques to Common Encounters in School Counseling: A Case-Based Approach.” Vick was named Alabama School Counselor Association Elementary Counselor of the Year for 2013.

After teaching for seven years, Yancey is now the secondary program area specialist for Shelby County Schools. She also serves as the Problem Solving Team coordinator, the Student Government Association supervisor and member of the Continuous School Improvement team.

Diana Statum was the recipient of the Elementary Education Award. She received a bachelor’s degree in elementary education from UM in 1980 and immediately went to work in Shelby County as a substitute teacher. After a brief stint in St. Mary Parish, La., she returned to Shelby County in 1982 and now teaches fourth grade at Helena Intermediate School.

The University of Montevallo is a tradition in Statum’s family. Her mother, husband and sister graduated from UM, and soon her daughter will follow in their footsteps. “Teaching is a payday every day. There is no other profession you can do for 32 years and still look forward to another 10 years,” Statum said.

The recipient of the Kinesiology Award was Catherine Simpkins, who earned the master’s degree in kinesiology from Montevallo in 1994.

Simpkins taught physical education at Valley Elementary School in Pelham from 1986-1996 and also coached volleyball and basketball. She created developmentally appropriate curriculum that was creative, innovative and child-centered. While at Valley, Simpkins was named Teacher of the Year and received the Outstanding Leadership Award.

She has served as the physical education teacher at Oak Mountain Intermediate School since 1996, assisting in developing high quality curriculum. She provides annual workshops for UM’s Teacher Education candidates and serves as one of UM’s cooperating teachers. In 1996, Simpkins was nominated for the “Birmingham Post Herald’s” Distinguished Teacher Award. She also volunteers in a number of events in support of children’s health.

Ginger Aaron-Brush, a National Board Certified Teacher since 2007, received the Regional InService Center and AMSTI Award. She earned a bachelor’s degree in physical education in 1999 and a master’s in education in 2002, both from the University of Montevallo.

A teacher at Valley Elementary School since 2000, she has received several significant grants as well as numerous honors and recognitions. She was named the Elementary Physical Education Teacher of the Year in 2010 and recently was chosen as the 2013-2014 Elementary Teacher of the Year for both Alabama District III and Shelby County Schools.

The recipient of the Instructional Leadership, M.Ed. Award was David Hogue, who earned a master’s degree in instructional leadership from UM in 2011. Hogue has 14 years experience in public education, serving as a teacher, coach, athletic director, and assistant principal.  He spent five years at Oak Mountain High School where he served on the school’s Continuous School Improvement Team and the 2011 National Blue Ribbon School Committee. He is currently serving as the Supervisor of Athletics, Health, Physical Education, and Driver’s Education for Shelby County Schools.

“He is an excellent example of what every teacher should strive to be. His concern for students is evident not only by the outstanding teaching he provides in the classroom, but also by the time he spends with his students before and after school,” said OMMS Principal Larry Haynes. “Current and former students and parents continue to praise the positive learning environment and high expectations in Mr. Bullock’s classroom. Mr. Bullock is always willing to go beyond the call of duty. During the winter storm outbreak that paralyzed our area, Mr. Bullock eagerly volunteered to spend the evening with over 200 students and faculty/staff members. All in all, he spent 33 consecutive hours at the school.”

The Joint JROTC Color Guard renders honors in salute to the flags about to be retired. (contributed) FROM STAFF REPORTS... read more