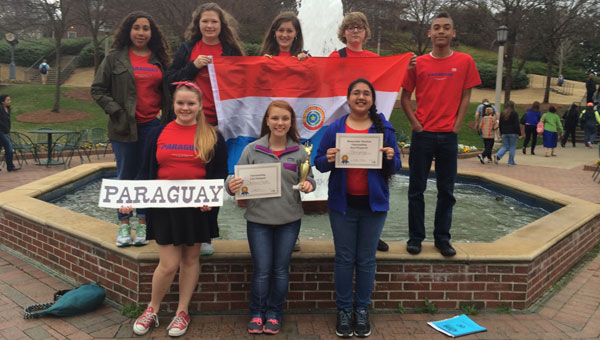 PELHAM – Riverchase Middle School students had a chance to show off their skills in public speaking, critical thinking, research, teamwork and leadership while increasing their awareness of global issues at the Junior United Nations of Alabama General Assembly at Birmingham Southern College on March 12. The RMS JUNA delegation, consisting of Jeremy Cornett, Caroline Doughty, Isabella Finley, Addison Fuller, Arshnoor Grewal, Hope Love, Hannah Walsh and Marcellous Washington, attended the general assembly along with 48 other delegations from the northern Alabama area.

“Getting to see the creativity of other schools was very interesting,” Love said. “I enjoyed learning how other people view the world. Discussing world issues really brings people closer.”

“It was a fun and interesting experience,” Washington said. “I’ve never done anything like this before, and would like to do it again.”

The RMS delegation presented their resolution of providing safe houses for homeless and abused children in Paraguay. They also had an opportunity to listen to other delegations present their resolutions. All their hard work paid off when RMS received an honorable mention for Best Prepared Delegation. Addison Fuller received the Most Outstanding Girl Delegate award.