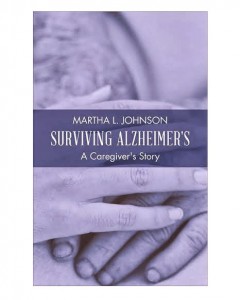 Helena resident Martha L. Johnson wrote a book retelling her experience as a full-time caregiver for an Alzheimer’s patient and offering advice for the millions of families touched by Alzheimer’s and dementia every year. (Contributed)

In 2006, Johnson became the full-time caregiver of her father-in-law who was living with Alzheimer’s. Her book, “Surviving Alzheimer’s: a Caregiver’s Story,” retells her experience caring for her father-in-law and the struggles she and her family faced while her father-in-law struggled with the disease. Through her book she provides insight and advice to other families of Alzheimer’s and dementia patients.

“My main goal is to communicate, understand and take the stigmatization away from these diseases,” Johnson said. “Families don’t talk about it, they’re very embarrassed by it.”

Inspiration for the book came from the families Johnson met during her father-in-law’s time in assisted living care.

“We talked about the things we had all gone through,” said Johnson, noting that many experienced the same struggles and challenges.

Johnson encourages families to pragmatically and objectively talk about diseases like Alzheimer’s and dementia to ensure that affairs are in order and a care plan is made. However, she also urges relatives to understand what the patient is going through.

“For a family to survive, they have to understand what the sick person is going through,” Johnson said, emphasizing that Alzheimer’s and dementia “trap” patients in their own minds. “One day, they’ll forget who their family members are, and it hurts.”

“This is aimed toward a broad audience,” Johnson said. “I am trying to touch families, neighbors, those in the medical field and the church audience.”

Johnson will be signing copies of her book at Rosenberger’s Birmingham Trunk from 1 p.m. – 3 p.m. on April 4.

Officer Dustin Chandler, left, his wife, Amy, with Gov. Robert Bentley who is expected to sign Carly’s Law in the... read more