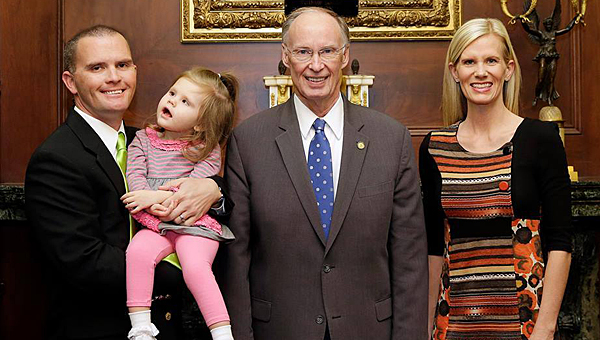 Officer Dustin Chandler, left, his wife, Amy, with Gov. Robert Bentley who is expected to sign Carly’s Law in the coming weeks. (File)

PELHAM—On Oct. 13, Rep. Mike Ball received an email from the grandmother of toddler Charlotte Dalton, requesting he look into the medical benefits of cannabidiol to treat seizures, like the ones caused by her granddaughter’s Dravet syndrome.

A few weeks earlier, Pelham police officer Dustin Chandler began to research CBD oil for his young daughter Carly who suffers from CDKL5, a rare genetic condition that can cause more than 10 seizures a day.

“Its kind of amazing how it worked out,” said Chandler of his partnership with Ball which eventually led to the passage of Carly’s Law through the Alabama Congress.

AL HB 104, also known as Carly’s Law, calls for the medical testing of CBD oil to treat seizure disorders. Chandler noted testing in other states has shown it has an 85% success rate in alleviating seizures among children with severe conditions where other treatments have failed.

The biggest hurdle for Carly’s Law to overcome was the oil’s source, the flower of the cannabis plant. As a police officer, Chandler emphasized this area has a high concentration of CBD and very low THC.

“My background is law enforcement, and I approached it from that standpoint,” Ball said, emphasizing the oil does not produce a high in those using it for medical reasons. “There is no recreational value in CBD oil.”

In addition, the bill allots $1 million for research at University of Alabama at Birmingham to investigate how CBD works. While seizure control is the focus, studies have indicated that the oil has the potential to treat a wide variety of ailments.

“There are 50,000 Alabamians with seizure disorders, and there is some indication that it has antipsychotic potential,” said Ball. “It has the potential to help a lot of people.”

After months of work and lobbying, Carly’s Law unanimously passed through Alabama Legislature in late March.

“Getting a unanimous vote at every step is astonishing to me,” said Chandler. “This has been a truly humbling experience, it has been an honor to be part of this.”

Although the law is still waiting for Gov. Robert Bentley’s signature, and there are still several steps CBD oil must go through before it can be approved for use, it has given hope to many Alabama families like Carly’s and Charlotte’s.

“I’ve never guaranteed this will work for Carly, all we wanted was a chance to try it,” Chandler said. “This gives families a little hope to improve their child’s quality of life.”

By CASSANDRA MICKENS / Associate Editor HOOVER — A March 25 fire at the Inverness Country Club has been ruled to... read more