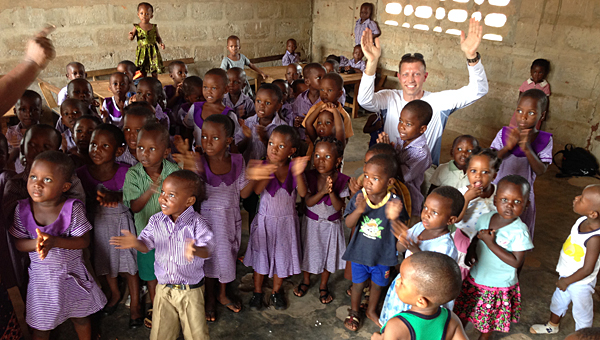 Craig Sorensen, a member of the Alabaster-Pelham Rotary Club, had never experienced anything like he did while visiting Ghana, Africa in early March.

When Sorensen, a Pelham resident, arrived at a dedication ceremony for a new water distribution system serving several towns and villages near the Ghana coast, he was greeted by hundreds of local residents, chieftains and village leaders.

“You can get numb to how big of an issue this is, and then you actually get over there,” Sorensen said. “I would say 250 to 300 people showed up to say thank you at that ceremony. The chieftains and village leaders said they had never seen anything like that.”

From Feb. 25-March 4, Sorensen served as an ambassador for the Alabaster-Pelham Rotary Club, which recently partnered with the Boaz, Albertville and Guntersville Rotary clubs to provide a $17,000 donation to construct the water distribution system.

Through the system, water was extracted from an underground well and piped to surrounding areas. Before the system was constructed, many residents in Ghana walked several miles every day to obtain water necessary for survival.

Once construction began on the distribution system, the clubs’ donations went farther than expected.

“We wanted to do just a few villages to start with, but they found ways to get it to more villages and areas,” Sorensen said. “Now, there are 12 water stands serving nine villages, a school, a church and boarding school, a poultry farm and a market.

Sorensen, who is the managing director of Birmingham’s SouthWest Water Company, said the Ghana system is designed to be self-sustaining. Those who use the wells are charged 10 cents per fill-up, and all money will be used to maintain the system’s infrastructure.

The local Rotary clubs’ donations have made a significant impression on those served by the distribution network, Sorensen said.

“You’ve got to feel positive for doing something that is so impactful and meaningful for so many people,” Sorensen said. “We are known as Alabaster the beautiful over there now.

“You can’t overstate the impact we have had on these people,” Sorensen added. “We’ve touched generations.”