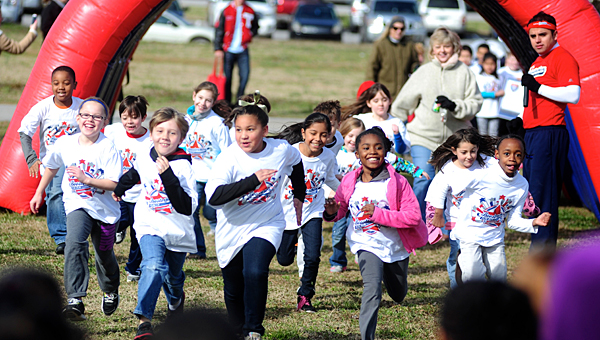 Students participate in a 2013 run at a local school. Shelby County recently was named the healthiest county in the state, posting state-high numbers in nearly every category. (File)

For the fifth-straight year, a national health ranking agency has named Shelby County the healthiest county in Alabama, citing high marks in quality of life and health factors.

The Countyhealthrankings.org website published its 2014 list of the healthiest counties in each state on March 26, outlining data ranging from adult obesity rates to high school graduation rates.

The website graded each county in several categories, including length of life, quality of life, health behaviors, clinical care, social and economic factors and physical environment.

Shelby County was ranked No. 1 in every category except physical environment, where it ranked 22nd out of Alabama’s 67 counties.

Shelby County’s poor or fair health rates were on par with the best in the nation at 12 percent, compared to Alabama’s rate of 21 percent and the top U.S. performers’ rate of 10 percent.

The county’s adult obesity rate of 30 percent was slightly lower than the state average of 33 percent, but was higher than the 25 percent rate reported elsewhere in the country.

Shelby County also ranked among the best in the country in its number of uninsured residents, as the county’s rate of 12 percent slightly trailed the top U.S. performers’ rate of 11 percent. Alabama’s average was 17 percent.

The county’s lowest marks came in the physical environment category, which included items such as air pollution, driving alone to work and driving long commutes.

Shelby County was followed on the list by Baldwin and Lee counties. The least healthy county in the state was Lowndes, followed by Walker and Perry, according to the list.

The facility has over 28 outdoor shooting ranges, and a variety of other locations that will be used during the... read more