Spring has hatched at Helena Hardware 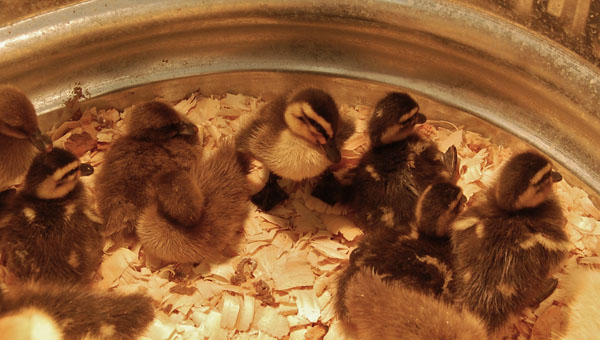 Helena Hardware is selling various breeds of chicks and ducklings and is expecting another shipment of baby birds in the next two weeks. (Reporter Photo / Molly Davidson)

HELENA—Spring has arrived at the Helena TrueValue Hardware store. This week the store received 100 chicks and 40 ducklings from the Murray McMurray Hatchery in Iowa.

And they are popular. True Value has sold 30 chicks since they arrived on March 24, and 10 ducks since their delivery on March 26.

The chicks are being sold for $2.75 each. They are from a variety of breeds, but they are all brown egg layers, said Barron.

True Value is also selling three types of ducklings, Rouen and Khaki for $5.99 and White Crested ducks for $7.99.

Although Murray McMurray’s hatchery said duck eggs are edible, Barron said he expects most are purchased for their aesthetic value.

“Ducks are something cool to have if you have a pond,” Barron said.

However, before purchasing a baby bird, be sure to check area zoning laws. According to Barron, some cities and towns restrict chicks to agricultural zones.

Zoning laws haven’t stopped people from coming to check out the chicks and ducklings. Barron said children have been especially interested in the baby birds, and he is working to set up a visit with Helena Elementary School.

Helena Hardware is expecting another delivery of ducklings and 300 chicks to arrive the second week of April, just in time for the store’s grand opening celebration on April 11-13.