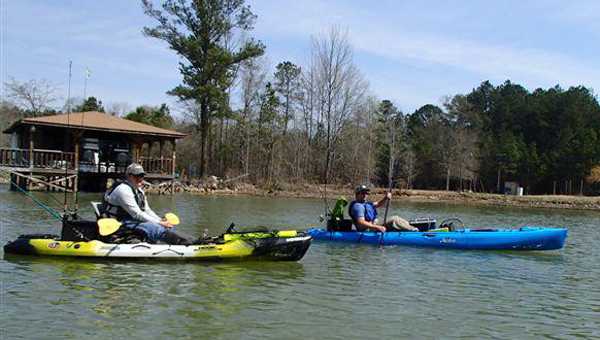 Columbiana will play host to a unique style of fishing tournament March 28, as the Coosa Canoe and Kayak Fishing Tournament will hold the first stage of its 2014 series on Lay Lake.

The series’ anglers, as the title suggests, fish from canoes and kayaks during the tournament, which lasts from the first official safe light of day until 4 p.m. Frank Chitwood of the the Coosa Riverkeepers, —organizers of the event— said other differences from other bass tournaments besides the form of transportation used.

“There are two big differences,” he said. “No. 1, there are no motors allowed. (Anglers) can’t even have trolling motors. The second is that we do catch-photograph-release.”

Catch-photograph-release, or CPR, is a form of angling that requires anglers to land a fish, photograph it, then release the fish back into the water in a matter of minutes rather than keep fish in a boat live well for a tournament weigh in.

Chitwood said anglers are issued the same ruler, along with a piece of paper with a random word on it, also known as a “token” to prevent cheating. The fish must be compared with the ruler and photographed with the token and with the canoe or kayak in view.

Another difference from other tournaments is that instead of cash payouts for winning anglers, prizes from sponsors go the winners. Prizes are awarded not just for individual events, but also for year-long performance.

Chitwood said that 56 anglers were signed up for the Lay Lake Open.

“This is the third year of the tournament,” he said. “The first year we just did one stage and last year we did three stages. This year (there are) five stages (and it’s the) first year we do one on Lay Lake.”

While many think of bass tours as the televised tournaments that often include lightning-fast boats and multi-sponsored anglers, but Chitwood said the goal of the event was bring enjoyment to people who love the outdoors.

“It’s different in a big way,” he said. “It’s more about having fun. The competition…is what it’s all about.”

While entry to event is closed, those interested in participating in the next event are encouraged to visit coosariver.org for more information.

By DREW GRANTHUM/Sports Writer Panning the sidelines at any high school sporting event in the county, one might not give... read more