A 50-year-old Childersburg man is being held in the Shelby County Jail on bonds totaling $32,300 after police said he allegedly impersonated a police officer and shoved down an Alabaster Walmart loss prevention employee while trying to steal $217 worth of antifreeze. 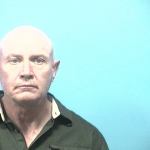 The Alabaster Police Department arrested Robert Anthony Frye, whose address is listed in the 7000 block of Old Sylacauga Highway in Childersburg, on March 26 and charged him with felony counts of third-degree robbery and impersonating a peace officer.

He also was charged with misdemeanor counts of third-degree theft of property, attempt to elude law enforcement and public intoxication.

According to Alabaster Police Chief Curtis Rigney, officers received a report of a shoplifting incident at the Alabaster Walmart in the Propst Promenade shopping center shortly before 1:20 p.m. on March 26. Rigney said a loss prevention officer at the store approached Frye as the suspect allegedly was attempting to leave the store with $217 worth of antifreeze he had not paid for.

When the loss prevention officer confronted Frye, the suspect allegedly pushed the employee down and ran from the store, Rigney said.

“Any time you steal something and you use force to get away, it turns into robbery,” Rigney said during a March 28 interview, noting the suspect “had been drinking.”

Rigney said officers apprehended Frye, who was “wearing a badge on the outside of his clothing and was dressed as a law enforcement officer,” a short time later in the parking lot of the nearby Books-A-Million store.

Third-degree robbery and impersonating a peace officer are Class C felonies. If convicted, Frye could face up to 10 years in prison per charge.

Spring has hatched at Helena Hardware

Helena Hardware is selling various breeds of chicks and ducklings and is expecting another shipment of baby birds in the... read more