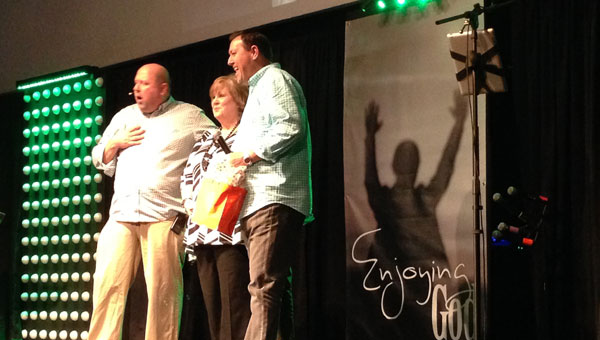 “This opportunity fell into our lap,” said Greg Davis, pastor of Chelsea’s The Connection church. “We didn’t seek it, they came to us.”

He is speaking of combining forces with The Master’s House Church in Pelham.

“There are about 65 people attending there and they are ready to become part of who we are and what we do at the Connection,” said Davis. “Several people here have asked about attending in Pelham.

“We will be doing the same thing there that we do here, except I’ll be preaching on a big screen. By the time we’re through with the changes, you won’t even notice I’m not there, except you won’t get spit on in the front rows,” Davis added with a smile.

“God always works things out in the right time and the right place,” said Master’s House Pastor David Rogers as he visited all three Connection services between preaching in Pelham. “I am excited to be a part of what he is doing at the Connection.”

Rogers and wife Dianne will join the Connection staff as Adult Life pastor and minister to both campuses. Pelham Campus pastor will be Blaine and Linda Davis.

God has done the impossible here before. Everyone told Davis it would not work to combine two churches. But, K-Springs and Chelsea Community Churches are growing now as The Connection. Davis is the senior pastor; Alan Higdon, former pastor of K-Springs, is youth pastor.

“We have helped plant other connection type ministries in Washington, DC, Brooklyn, N.Y. and Seattle, Washington,” said Davis. “This year our mission trip will be to Pelham, to get facilities ready. Our first Sunday will be April 27.

“Cost for this campus will be half that of starting from scratch. We need to raise $20,000 to start debt-free. We will attempt that April 6, in one big offering. God is amazing in the way he works,” said Davis. “We felt lead to pray for an opportunity like this, since all avenues for local expansion have met with road blocks. But, we never expected God to move so quickly.”