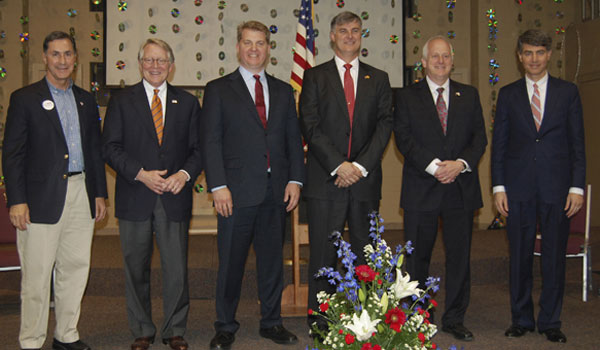 The candidates share similar stances on many of the issues discussed, but each presented nuanced views during the debate.

In response to a question about medical marijuana, all of the candidates agreed that Carly’s Law was good for Alabama, and supported the bill, which was unanimously approved by the Alabama Legislature.

Candidates solidified their position during the closing statements, and emphasized the different benefits they bring to the table.

“There is serious work to do,” he said.

Robert Shattuck, an attorney, encouraged voters to give Congress a grade based on its performance.

“Why is Congress performing so horribly?” he asked, and said fixing Congress should be the first priority.

Palmer, chief development officer for the Alabama Policy Institute, said families should be the priority.

“It’s about people and families,” he said. “We need to create jobs and get people back to work.”

Mathis, an orthopedic surgeon, emphasized how being a doctor will help him repeal Obamacare.

“As a doctor I’ve seen the ill effects,” he said. “As a doctor I will be fast-tracked to the doctor’s caucus.”

DeMarco, a state representative from Homewood, emphasized his Alabama values.

“This is my home. I’m going to take these Alabama conservative values to Washington D.C.,” he said.

Beason, a state senator from Hartselle, said that change is possible.

“The country can have a renaissance. We can do better. Choose the person you think will do the best job for you,” he told the audience.

“If we keep doing the same thing, we keep getting the same results. It’s time to return the federal government back to the constitution.”

The Republican primary is set for June 3. There is no Democratic candidate for the seat. A runoff, if necessary, is set for July 15.