Columbiana ‘all aboard’ for new trolley 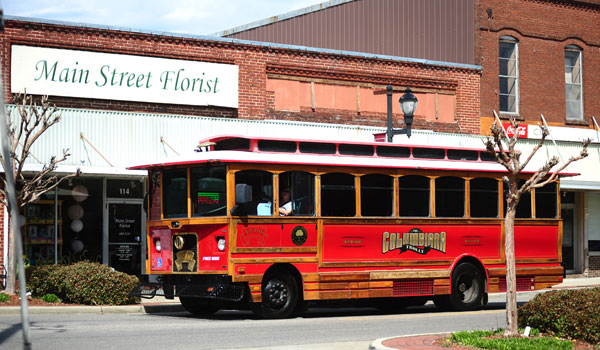 COLUMBIANA—Renee Miller, a school bus driver and volunteer trolley driver, clanged the bell and yelled “All aboard,” on the Columbiana trolley for the very first time on April 1.

The highly anticipated Columbiana trolley began its route at 8:30 a.m. with four passengers on board.

Helen Dean, marketing director for the city, was one of the very first riders, and rode the trolley to a meeting at Elvin Hill Elementary School.

“This has been one of the mayor’s dreams for a very long time,” Dean said. “We have a high population of walkers, and sometimes that can pose a traffic hazard. I hope they all take full advantage of the trolley.”

The trolley made its first stop at Clear Spring apartment complex, where residents waved and came out to look at the trolley.

“I’ll be looking out for you,” one resident said. “I think I’ll take a ride tomorrow.”

Columbiana Mayor Stancil Handley said one elderly Columbiana resident called and explained that she used to have to pay a driver to take her to get her medicine, but will now take the trolley.

“That’s the biggest thing,” Handley said. “This will be great for the community.”