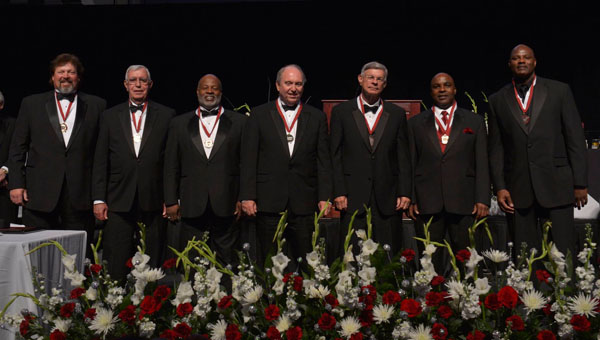 In addition to serving as the president of the Pelham Board of Education, Rick Rhoades is now a member of the Troy University Athletic Hall of Fame. Rhoades was part of the eight-person class inducted into the Hall of Fame on March 29, the third class since its founding in 2012.

Rhoades coached the Troy University football team to the 1987 NCAA Division II National Championship and secured two Gulf South Conference titles during his three years as head coach. He completed his tenure as Trojan head coach with an overall record of 28-7-1.

“This was a public recognition for the hard work of a lot of people,” Rhoades said of the March 29 Hall of Fame induction ceremony. “It is a tremendous honor.”

Along with his years at Troy University, Rhoades has coached numerous teams, both home and abroad, at the high school, college and professional level, and led the Mountain Brook Spartans to a perfect season and State Championship title in 1976. He served as the Pelham High School football coach from 1996-2000. But coaching football was not all about winning for Rhoades.

“Wins and losses come and go,” Rhoades said. “The continuing relationships with players and coaches are the best part of coaching.”

Rhoades retired from coaching in April 2013, however he said the lessons he learned from football still apply to his life today.

“I learned there is no substitute for hard work,” Rhoades said. “It is important to have a plan and not let anything deter you from following that plan.”

Although his coaching years are behind him, Rhoades is still a leader, serving as president of the Pelham Board of Education, which is in the process of creating its own school system by July 1.

Father walks in on daughter’s home being burgled

By CASSANDRA MICKENS / Associate Editor COLUMBIANA — The Shelby County Sheriff’s Office is investigating a home burglary in which... read more