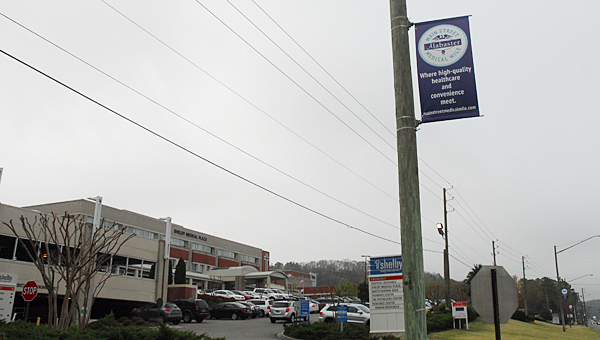 During an April 1 interview, Ward 3 Councilwoman Stacy Rakestraw said the signs are the first step toward forming the Medical Mile district, which Rakestraw said contains more than 1,000 health care professionals in about 300 medical offices.

“We are still in meetings with several of the medical groups to plan the details of how this project will be rolled out,” Rakestraw said.

Alabaster Mayor Marty Handlon has touted the Medical Mile district over the past few weeks, displaying the new banners at meetings with Alabaster business owners and Greater Shelby County Chamber of Commerce meetings.

Handlon praised Rakestraw for bringing the Medical Mile district idea to city officials after visiting her hometown, Jonesboro, Ark., in December 2013. Rakestraw said she came up with the idea after seeing a similar medical district near St. Bernards hospital in Jonesboro.

Handlon previously said the project is aimed at touting Alabaster’s plethora of medical offerings while possibly drawing new medical-related businesses to the city in the future.