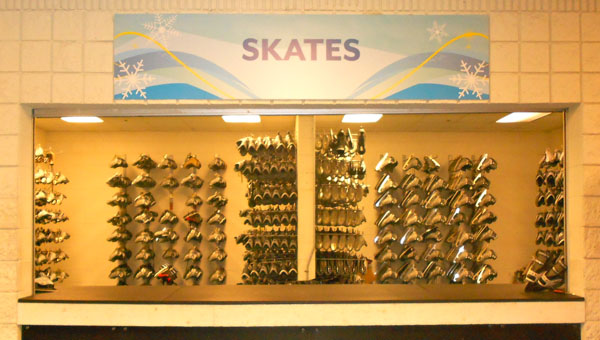 Brand new skates line the walls of the Pelham Civic Complex skate rental booth, just one of the many changes Civic Complex Director, Danny Tate, has made to improve the facility. (Reporter Photo / Molly Davidson)

PELHAM—From the outside, the Pelham Civic Complex looks like any convention center, but inside it is rapidly changing into a top-of-the-line ice and entertainment destination.

Not long ago the Pelham Civic Complex appeared to be on the verge of shutting down, as Pelham officials talked about selling the facility that had been losing the city money for years.

According to Pelham Finance Director, Tom Seale, the Civic Complex lost nearly $1 million in 2009 alone. However, under the Mayor Waters administration and the leadership of Civic Complex Director, Danny Tate, things have started to turn around.

“The last administration was tough, they gave up on the Civic Complex,” Tate said. “Now we’ve started to look at the things we do well and capitalize on them.”

According to Tate, this all starts with a focus on the ice.

“The previous directors didn’t look at the ice as an asset,” Tate said, adding the arena only contained ice for three months out of every year. “Skating is the staple of the facility, it’s so unique to this area because you’re almost 100 miles away from any other facility like this.”

Tate has done extensive work to better the ice programs by training the entire staff on basic ice care and maintenance, revamping children’s hockey and figure skating classes and bringing in high-level competition.

With it’s two NHL regulation-sized ice rinks, the Civic Complex is the home of the University of Alabama Frozen Tide, the site of the SEC Hockey Championships and in 2015 it will host the College Division III Hockey Nationals.

And Tate isn’t done. He recently purchased entirely new rental skates, installed theater lighting in the main rink and has his eyes set on expanding seating in both ice rinks. He also hopes the Pelham schools will use the arena for physical education classes.

Benefits from Tate’s improvements can be seen throughout the Civic Complex. According to Tate, in only six months the facility has made nearly 90 percent of its expected yearly revenue, and this is just the beginning.

“I want this place to be rocking,” Tate said. “I want this to be a fun place for the whole community.”

Panthers push past Jaguars in thriller