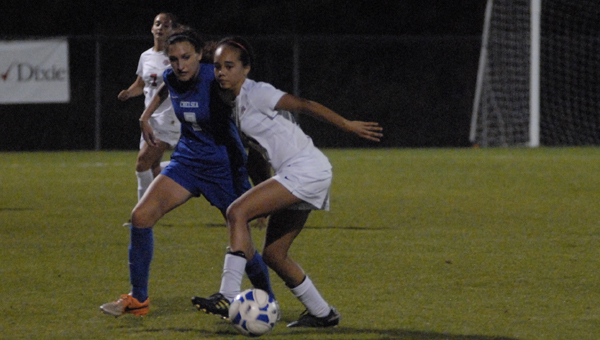 CHELSEA—It was an odd sight to see when the Thompson Warriors and Chelsea Hornets girls soccer teams took the field at Chelsea April 3; due to the set up of the Birmingham Metro Tournament bracket, the Warriors were slated as the home team and were in white, while Chelsea played on its home pitch yet were in road blue.

When all was said and done, however, it seemed like a home match for Thompson, as the Warriors took home a 2-0 win.

The scoring happened almost immediately, as Amber Harless netted a shot at the 39:04 mark in the first half. She was assisted by Brittany Yoder giving the Warriors the 1-0 advantage.

The Hornets’ defense then stepped up, as both squads battled for possession.

Chelsea keeper Hailey Joseph withstood multiple scoring attempts in the half, making saves at the 14:39 and 12:39 mark to keep the score 1-0.

The Warriors sailed an opportunity over the goal at 11:41, and the Hornets’ also booted a shot wide of the net at the 8:40 mark. Joseph came up big with another save at 5:11, and a shot by Chelsea’s Morgan Bramblett went wide near the three-minute mark.

Neither team found the net, and the Warriors took a 1-0 lead into the half.

Thompson struck again at the beginning of the second half, as Megan Cottingham scored at the 39:06 mark to put Thompson up, 2-0.

It was all the scoring either team mustered, as the Warriors took the 2-0 win.

“It was nice because we’ve now put a full game-and-a-half behind us without giving up a goal,” he said. “We have a really young defense, so it’s great to be able to get a shutout. I think we looked pretty good.”

The Warriors move on to face Hoover at home April 10, while Chelsea looks to regroup against Oak Mountain on April 11.