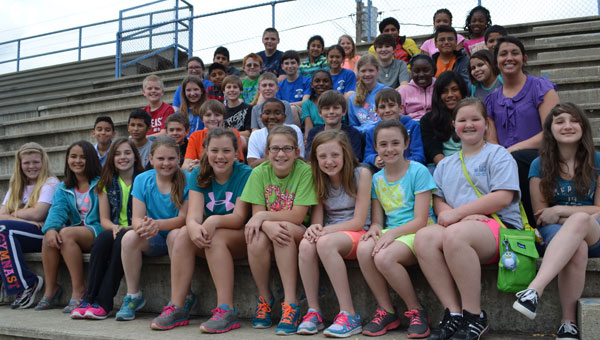 Montevallo Elementary inducted 43 fifth-graders into the National Elementary Honor Society this school year. In front of an audience of parents and family members, fellow classmates and school administration, these students were honored for their scholarship, responsibility, leadership and service.

“The requirements to be inducted into NEHS include having no more than one ‘P’ in reading and a final average of an 85 or higher in math from the fourth grade,” sponsor Lauren Sheehan said. “Also, students cannot have any discipline referrals in third through fifth grades.”

The large number of students achieving this honor is attributed to the fact that they are exposed to the induction ceremony itself.

“Each year, we allow the fourth graders to come to the ceremony,” Sheehan said. “I believe that by allowing them to witness such an important honor, students find a goal to work toward. Several students expressed to their teachers that seeing the ceremony makes them want to experience it themselves, so they are working harder to reach that goal.”

These newly inducted students are now involved in an organization that promotes activities to further develop leadership skills and encourage community service. A continuing goal to achieve in academics while developing as a leader are attributes that will lead a student to success in middle school and high school.

“There are definite benefits to becoming a member of NEHS,” Sheehan said. “Not only does this set the tone for the remainder of a student’s academic career, but it truly shows that working hard in school and having good character pays off, and for those aiming to be a part of NEHS, they know what they need to do to achieve their goals, and they can see that it is possible.”

Take a trip back in time