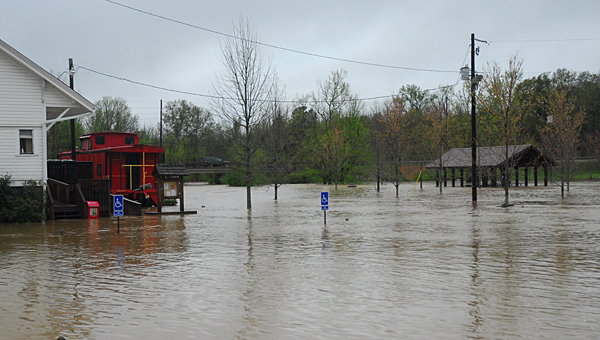 “A lot of it was precautionary because the water was rising so quickly,” SCSO Capt. Ken Burchfield said in a phone interview at about 9:30 a.m. We didn’t want to see anyone get hurt.”

Burchfield said deputies went door-to-door in the trailer park at about 3 a.m. to urge residents to evacuate to the nearby Cumberland Presbyterian Church, which was set up as a temporary shelter for the displaced residents.

“The water was up to the door handles on some of the vehicles out there,” Burchfield said. “If the water gets too high, it can lift mobile homes off their foundations.”

The Pelham Police and Fire departments were using boats and Humvees to shuttle stranded homeowners to safety in the Chandalar subdivision and other parts of the city, and at least one road had partially collapsed in the Quail Run subdivision off Alabama 119 east of Interstate 65.

At about 10 a.m. John DeBlock, a meteorologist at the National Weather Service office in Calera, said the office had received about 3.87 inches of rain the past 24 hours.

“That’s on the order of what the county receives in a month,” DeBlock said, noting the NWS did not expect additional significant rainfall amounts on April 7-8.

Alabaster reported about “two dozen” road closures at the height of the storm, but only had two impassable roads at about 9:30 a.m: Ball Park Road and Fox Valley Road.

“The city has received no reports of damage,” Alabaster City Manager George Henry said in a phone interview. “The credit goes to Public Works, Environmental Services and the Police Department.”

As of 11:00 a.m., Calera did not have any road closings or damages reported, according to the Calera Police Department’s dispatch center.