Greystone’s Schifer named among Alabama’s Fathers of the Year

HOOVER — Larry Schifer of Greystone is one of five Birmingham-area dads named among Alabama’s 2014 Fathers of the Year by the Birmingham Father’s Day Council. 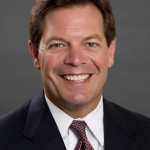 The Birmingham Father’s Day Council honors fathers for their outstanding commitment to their children and the values of fatherhood. The men will be honored during the fourth annual Father of the Year awards dinner, benefitting the American Diabetes Association, June 12 at 5:30 p.m. at The Club. The men are raising money for diabetes to continue research for a cure.

“We are proud to honor these exceptional fathers, who have so admirably balanced fatherhood with such successful careers and community service, serving as a role model for their children while making a positive impact in their communities,” said Melissa Kendall, Greystone resident and member of the Birmingham Father’s Day Council. “They deserve recognition not only as fathers and community leaders, but for their commitment to help change the future of diabetes.”

Schifer attends The Church of the Highlands, where he serves as an usher and is active in men’s small groups. He also served as a coach with Over the Mountain Youth Baseball, YMCA youth basketball and Hoover youth football.

Give credit where credit is due