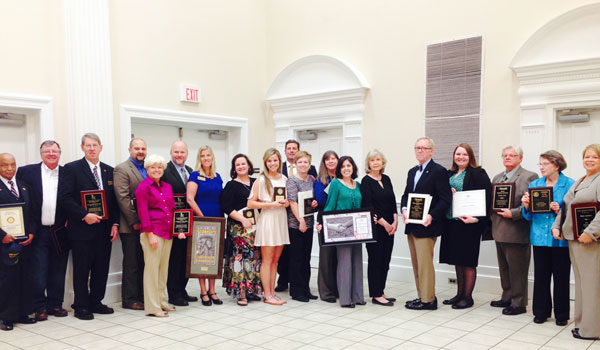 MONTEVALLO—“My principal called me to the office, and I thought I was in trouble, and then he was like, ‘oh, you’re receiving an award,’” Montevallo High School student of the year Emily Colley said.

Colley and 15 other deserving citizens as well as three organizations were honored at the 36th annual Montevallo Chamber of Commerce Citizens’ Night Awards Banquet.

The Montevallo Community Chorale performed before the event, and “Dollar Bill” Lawson served as master of ceremonies.

“Dollar Bill” Lawson and his wife, Mary, were also selected as the Civic Leaders of the Year by the Montevallo Chamber of Commerce.

“They are dedicated to making peoples’ lives better,” Steve Gilbert, executive director of the Chamber of Commerce, said of the couple.

The Montevallo Chamber of Commerce Citizen of the Year was Jimmy Bice, whose “countless hours of mostly behind the scenes work is demonstrative of his love of Montevallo,” Gilbert said.

Montevallo Middle School recognized Jessie Evans as Student of the Year, Trina Carter as Staff/Support Person of the Year and Sheila Jett as Teacher of the Year.

Montevallo High School named Sam Reese and Emily Colley as Students of the Year, Cathy Majors as Staff/Support Person of the Year and Lee Pastor as Teacher of the Year.

Dr. Earl Cunningham was selected as the Rotarian of the year. Barbara Readel received the Civitan Club Award, and Amanda Melcher was awarded the AAUW Pathfinder Award.

Mary Lawson was also given the Shelby Emergency Assistance Volunteer of the Year award.

The University of Montevallo Good Neighbor Award went to the Shelby County Commissioners.

Greystone’s Schifer named among Alabama’s Fathers of the Year

FROM STAFF REPORTS HOOVER — Larry Schifer of Greystone is one of five Birmingham-area dads named among Alabama’s 2014 Fathers... read more