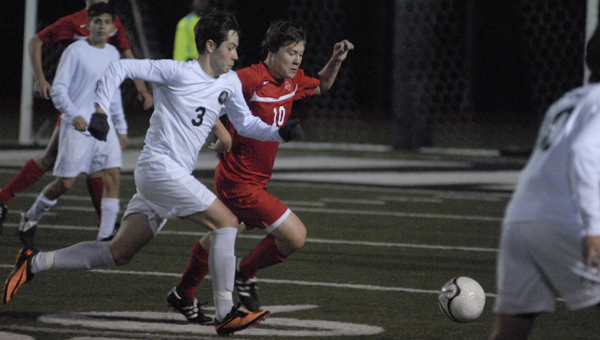 PELHAM— The Thompson High School Warriors visited the Pelham High School Panthers in boys soccer action on April 8.  It was the second of two area matchups between the teams, this time for the annual Border War trophy.

Thompson came out of the locker room swinging, wasting no time getting on the board as Jonathan Torres scored on a breakaway goal in the second minute of the game.

The Warriors continued to move the ball around well as they were able to score another goal, this time only five minutes into the contest. This time it was on a shot by forward Dimitri Davis.

With 27 minutes left in the first half, the Panthers got their first real scoring opportunity of the half. The attempt came short as keeper Abel Perez pounced on the ball before it reached the goal.

In the 25th minute of the game Thompson had a chance to extend their league as they got a direct penalty kick opportunity.  Jonathan Torres struck the ball well but Pelham keeper Javier Canales came up with the diving save.

At the start of the second half, the Panthers started to control the ball. With 25 minutes left in the contest, Pelham’s Javier Peneda took an open shot but the ball was saved by Perez.

Later in the second half Pelham had four corner kick opportunities but did not convert any of those into points.

With time running down Thompson was able to put the nail in the coffin, adding two more goals to their total. The first came on a long shot by Brennan Yoder. The other score was converted by Davis, his second of the game, making the final score 4-0.

“I thought despite two difficult losses to Pelham this season we were able to put those in the back of our minds,” said Thompson head coach Rusty Cowley. “We were able to play by far our best game of the year.”

Thompson will resume play as they play Coffee County Central April 11. Pelham will also play April 11 as they host a home contest against Chelsea High School.